Lorine Nelson has been a Nederland mainstay for 75 years 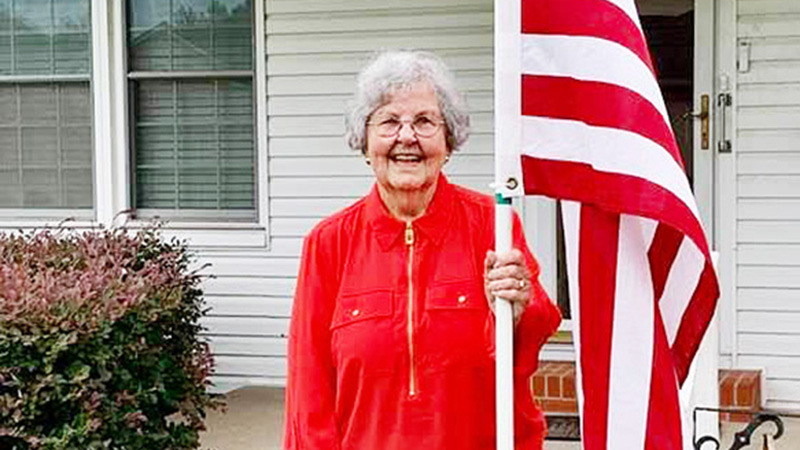 Lorine Nelson stands outside her Nederland home, where she has lived since 1946. (Courtesy photo)

NEDERLAND — Lorine Nelson is going to turn 98 next month, but the Nederland woman’s commitment to community and family remains as strong as ever.

Her birthday is Dec. 8. It’s a date that proved to be a turning part for her family.

It was Dec. 7, 1941, that the Imperial Japanese Navy Air Service executed a surprise military strike on Pearl Harbor during World War II.

Lorine and her future husband, Tuffy, were together at an ice cream shop in High Island when they heard news of the Pearl Harbor invasion the next day, which was her 18th birthday.

They married a week later and were together for 73 years before Tuffy died in 2014.

The couple moved to Nederland in 1946 after Tuffy completed his service.

She said her husband knew Nederland would be a good place to live, with opportunities for work. Tuffy was a proud member of Pipefitters Local 195.

“We joined First Baptist, which was then a small church on Boston Avenue, made many lifelong friends with so many good people in Nederland,” Lorine said. “One of our favorite pastimes was getting together with friends to play 42.”

Their sons, Harlan and Ronnie, and grandkids, Kellianne, George, Stan and Monte, made many happy memories for the couple growing up and going to school in Nederland.

“I am also proud of our great grandkids: Cade, Cole, Amber and Sara,” Lorine made sure to point out. “I am grateful for my health and thankful for all the many prayers, but just get tired of this slow recovery.”

The Nelsons took up a $5,450 note in 1946 and moved into their home, where sons Harlan and Ronnie would grow up.

They lived at the Theriot apartments while their house on 12th Street was finished. It was the first house Cale Doornbos built.

At that time you needed $100 to open a bank account at Nederland State Bank. Lorine put back a little from each check until they had enough to open an account.

Nederland was a small town, and they joined First Baptist. It was located on Boston Avenue at the time.

Lorine said she and Tuffy enjoyed and participated in the boys’ school sports programs. And she remembers being in the backyard hanging up clothes and hearing the Texas City explosion.

Today, Lorine is lone surviving member of the 1941 High Island High School, which graduated 14 that year.

Lorine, who is home now, was recently hospitalized after an early morning fall at her home, which led to a partial hip replacement.

A second surgery went well but a setback sent her to ICU.

She returned to her Nederland home, but within a couple days, suffered another fall, re-breaking a hip that was partially replaced eight weeks prior.

Throughout out it all, family and friends said she displayed a faith-filled brave soul that was often comforted by the prayers of loved ones.

After two falls, two major surgeries and 98 days in a hospital/rehab setting, Lorine was back in her Nederland home this summer.