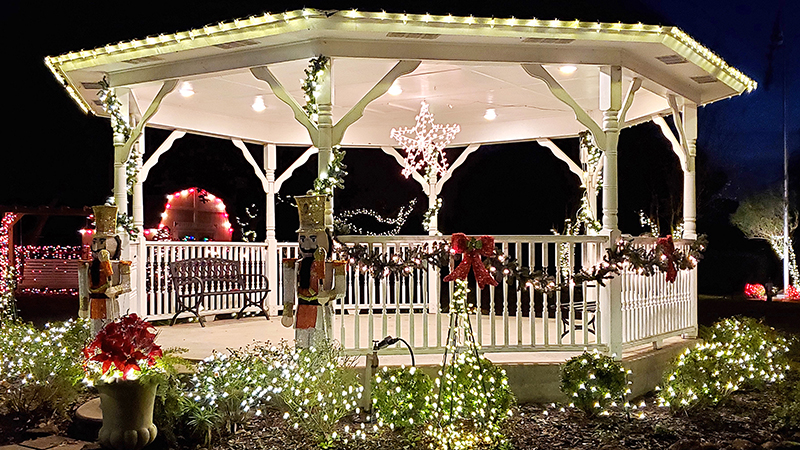 The gazebo in Celebration Park in Groves is lit up for the holidays. (Mary Meaux/The News)

Christmas on the Avenue will be from noon to 7 p.m. Dec. 4 on Boston Avenue in Nederland. There will be a toboggan tunnel, “snow”mazing maze, scavenger hunt, entertainment and vendors and shopping will be available up and down Boston Avenue. The tree lighting will be at 6 p.m. at Tex Ritter Park.

The Annual Groves 2021 Lighted Christmas Parade will be at 6 p.m. Dec. 4. The parade will begin at Cleveland at 39th street, then head west traveling down 39th Street to Gulf Avenue where the parade ends after making a right turn onto Gulf Avenue.

It’s a Melanin Christmas will be held from noon to 5 p.m. Dec. 4 at the Robert A. “Bob” Bowers Civic Center. There will be performances by the Memorial High School Chorus, Port Arthur Honeybees Dance Team, a toy drive/giveaway, paint corner, chili cook-off and Christmas activities.

7th Annual Christmas with the Constable Toy Drive will be from 5:30 to 7:30 p.m. Dec. 4 at Texas Artist Museum, 3501 Cultural Center Drive in Port Arthur. Bring two unwrapped toys, one for a girl and one for a boy. Constable Chris Bates and local groups will bring the sounds of Christmas and gumbo will be served.

Nederland Lighted Christmas Parade is set for 6:30 p.m. Dec. 7. The parade starts at Nederland Avenue and 21st Street (stadium road), turns left down Nederland Avenue then takes a left on 14th street past City Hall to Boston Avenue. Left on Boston all the way to 17th Street (Central Middle School), the end of the parade route.

The Museum of the Gulf Coast and City of Port Arthur will host Holiday Downtown on Dec. 11. The Museum’s event will feature Santa, live reindeer, face painting and more from 10:30 a.m. to 12:30 p.m. The city’s event, to be held at the Ernest Simpson Jr. Downtown Pavilion from noon to 8 p.m., will feature an ice skating rink, mechanical bull, zip line, Zorb Ball racing, Euro bungee and Snowzilla Slide Jr. as well as food vendors and pop-up shops.