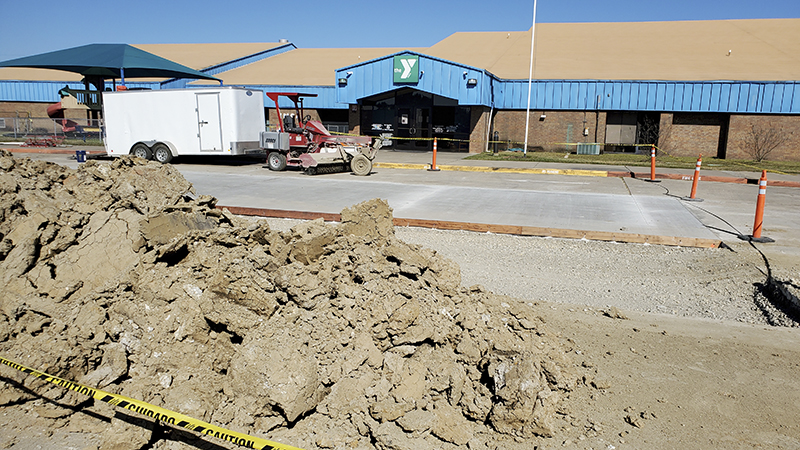 Upgrades are underway for the parking lot at the YMCA of Southeast Texas. (Mary Meaux/The News)

The parking lot at the YMCA of Southeast Texas is getting a bit of a makeover.

Work is nearing completion to replace parts of the parking lot.

Kevin Pearson, CEO, said the parking lot has been in place since 1986 and has been patched through the years. And now, with the means to do so, the project is underway.

Pearson said this would benefit patrons and the community for years to come.

The project is being undertaken in phases.

“We started three Mondays ago,” Pearson said. “We did it in two phases: a north phase and a south phases, so there’s always access to the front door. We divided the parking lot pretty much in half with each phase and we are able to do overflow paring by the building.”

Access to the facility, located at 6760 9th Ave., was available by the 9th Avenue entrance on Monday. Prior to that, access was available on the Lake Arthur Drive side.

Pearson said in addition to the upgrades in the parking lot, there are also runoff areas being built on the sides so the parking lot that will drain better. Typically in a heavy rain there are spaces that are under water. This will eliminate that issue, thus freeing up more spaces.

Finance director Kathy Pollock said the Y’s members are happy to see the work being done, saying it looks like a new parking lot.

LLB Construction is handling the job. This is the same company working on riverfront development in Port Neches.

Besides the parking lot upgrade, the Y is installing a new mini HVAC split system. Pearson said the old central air chiller went out in the social hall and the new system will allow for control of each of the rooms.

“Keep in mind when we do these improvements, it creates greater efficiencies,” he said. “We installed new pool heaters after the freeze and our gas bill went down dramatically because we’re efficient with our energy. The same thing for the new mini HVAC split system – giving them the ability to cut down on energy consumption.”