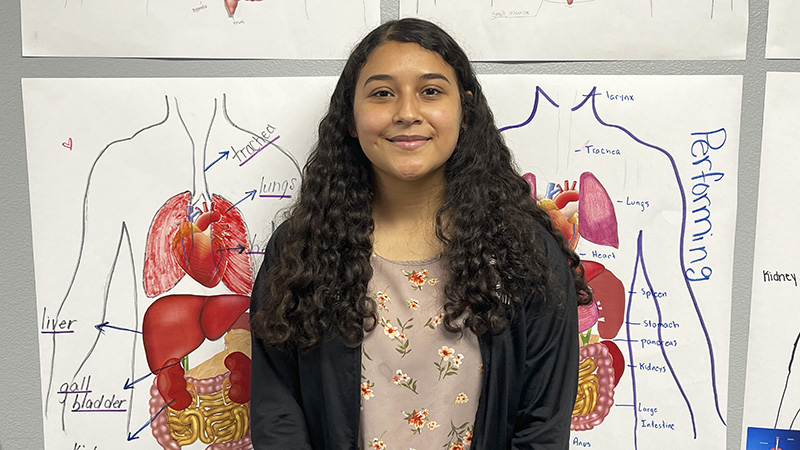 Victoria Gutierrez credits her family for her desire to excel.

Her father immigrated from Mexico to McAllen, where he met his wife. When Victoria was 3, they moved to Southeast Texas.

“I work hard for my parents,” the senior at Bob Hope School said. “My parents came from a poor background, so they were migrant workers in farms. And then they came here for a better job, which was in the refineries.”

She started her education at Sam Houston Elementary, moving to Bob Hope School in sixth grade. Now in her final year, the 17-year-old is enrolled in dual-credit courses, where she has already obtained credits towards her college degree.

And while she works hard, it often comes easy.

“They’re not that difficult for me because I feel like I retain information very easily,” she said. “This year I’m taking Spanish II — very hard since I forgot all my Spanish.”

But one of her college courses helped set her career path.

“I took a dual-credit biology class freshman year, and that was the first dual-credit class I’d taken. I was kind of intimidated, but the teacher was very excellent,” she said. “She explained biology in a way where I was just enthralled. I’m going to major in Biology when I go to college.”

That will ultimately lead to a career in pediatric oncology.

“I’ve always liked kids. I enjoy how their minds work,” Victoria said. “And I like the idea of helping people that sometimes can’t really see the light anymore. And sometimes there isn’t one, so I want to make them feel as comfortable as possible.”

Part of her course load at Bob Hope includes working in the nurse’s office at the elementary school. Mostly she writes files, organizes them and watches the kids when the nurse has to step away. But she’s found the experience one that will definitely benefit her career goals.

“There was a kid (that was) going through a hard time mentally because (they) didn’t really have friends,” she said. “And (they) started bawling (their) eyes out. And the nurse took total control of the situation. And I was amazed. If I were in that situation, I would bawl with (them) because it’s a kid crying. But the nurse handled it very well and I got to see how I would react in future situations.”

In addition to succeeding in academics, Victoria is also athletic. She’s played basketball, softball, and currently serves as the setter for the volleyball team.

“I was told that there was a seventh grader that was a promising volleyball player,” said Christian Cruz-Morales, Victoria’s volleyball coach. “I went to the gym to her PE period, and there was Victoria Gutierrez. It took her one set to show me that she will be the next varsity setter.”

Cruz-Morales said he also learned the following year that the student earned an excellent STAAR test score and was ranked first in her class.

“These six years coaching Victoria has been a pleasure,” the educator said. “She is an excellent student and athlete. Victoria always works hard on the court and in the classroom. She excels in everything that she does. I cannot wait to see her playing volleyball in college and become a professional. I am super proud of her!”

“My dad had a stroke earlier in the year, and it hit really hard,” she said. “I don’t want to be away from them.”