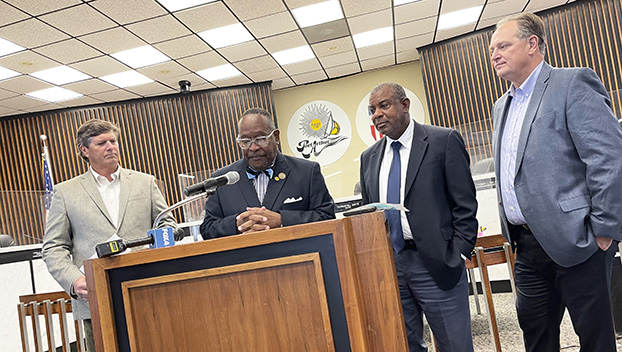 City officials and leaders of two local ports joined together Friday to announce a union formed to aggressively apply for grant money recently signed into law with the Bipartisan Infrastructure Bill.

“This piece of legislation reaches across the aisles of political ideology and persuasion and affords the citizens of even Port Arthur, Texas, to benefit in an enormous way,” Bartie said during a news conference.

“I’ve asked you to come today together for an announcement of a collaborative that I’ve called together to offer the possibility to our citizens something that I know we should get. And the only way that we can get it is by working in a collaborative effort.”

The bill was signed with the intention of providing national entities with grants to upgrade roads, bridges, railways and more.

“The U.S. Department of Transportation will announce more than $475 million in additional funding for port and marine highway infrastructure,” Bartie said. “We want to be prepared to receive the millions of dollars due to us.”

But in order to do so and not get buried in the back of the line, the mayor added, Port Arthur is taking an early start to ensure consideration, adding the city is “blessed with the advantages of two ports.”

“It’s about jobs and about economic development for our community,” he said. “And this collaboration is obviously very important for our neighbors, and we’ll do our best to work together throughout that process. Ports in Texas generate 20 to 25 percent of the state’s gross domestic product. That’s why it’s important that we look at this. They’re job creators…and they’re economic engines.”
Kelly echoed those statements and included the communication within city staff.

“We value having city leaders such as the mayor that look beyond City Hall to support our industries, particularly in the ports,” he said.

Burton said it’s a partnership the city would continue to build.

The Port of Port Arthur is in the middle of an expansion project that includes the completion of a new berth and development of downtown property.

The Sabine Pass Port Authority is working to grow and acquire property, and said grant money would allow the rebuilding of infrastructure that is aging and needs updating.

Grants from the Infrastructure Bill would help free up money already allocated to those projects.

“If the ports develop, we’re all going to develop,” Burton said.

And, Cowart said, the expansion and production of the city’s ports can factor in when large refineries and plants look for a place to expand.

Bartie said the group has 45 days to put together and submit a proposal in order to be considered for the first round of funding. A second round of funding would be released in 90 days.