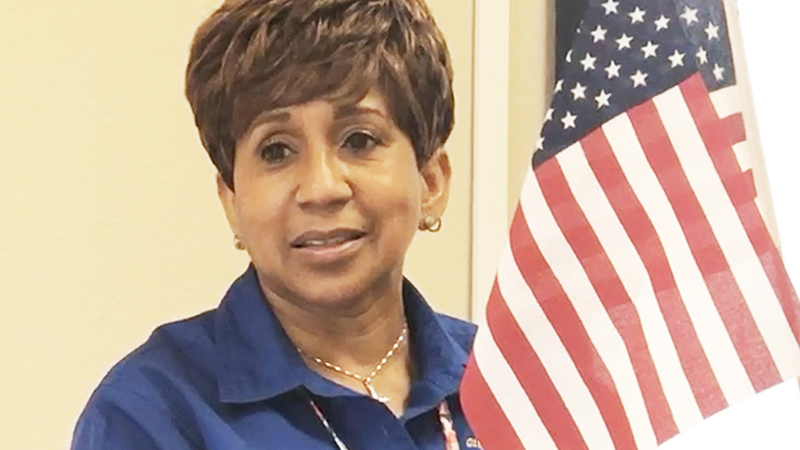 The Greater Port Arthur Chamber of Commerce on Thursday announced the selection of Judith Ann Smith as the 2022 recipient of the Arthur E. Stilwell Award.

Among her many achievements, Smith has been hailed in the last year for her efforts in getting COVID-19 vaccinations to residents of Southeast Texas and beyond.

dignity, and pride,” said City Manager Ron Burton. “As a healthcare professional, her selflessness and call to duty have never wavered prior to nor during the trying times of the Covid-19 pandemic. We are thankful for Judith Smith’s loyalty and dedication to the City of Port Arthur.”

According to information from the Chamber, Smith graduated from Hebert High School in 1975, and earned a Bachelor of Science in Nursing from Lamar University in 979. Since 1983, she has worked for the City of Port Arthur, starting in the Immunization and Adult Health Services clinic. In 1993 she became the Nurse Supervisor for the Tuberculosis clinic under Texas Department of Health and remained with that program for twelve years in the health department.

In 2005 Judith became the Assistant Health Director and continued providing TB services to residents in the community who were impacted by the disease and Latent TB infection.

Judith was promoted and appointed as Director of Health Services for the City of Port Arthur in 2013 and she continues to serve in this position today. She oversees fourteen (14) divisions within the health department and provides public health services to South Jefferson County and surrounding cities.

In 2016 she graduated from the Lord’s Outreach School of Ministry with a Doctorate in Theology.

The Port Arthur Health Department nurses, under her leadership, led the team and support staff to assist the County in starting the first COVID-19 mass testing activity at the Jack Brooks Airport in March 2020. In February 2021, the COVID-19 mass vaccination HUB was set up at the Bob Bower Civic Center and thousands of vaccines were administered.

individuals and vaccination, Judith stepped up to quickly, professionally and

effectively address the challenges we faced,” County Judge Jeff Branick said. “Her dedication to the mission of fighting the spread within the Southeast Texas region is deeply appreciated by me and the other members of our emergency management community.”