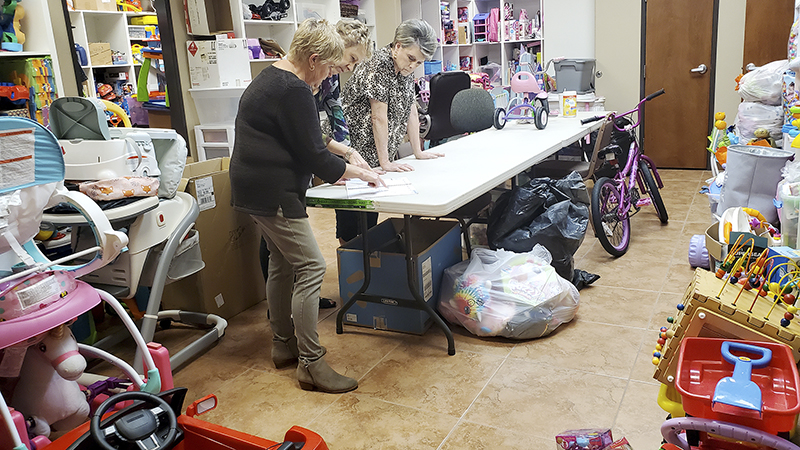 Debbie Perkins, left, Pam Vincent and Patti Hartje look over paperwork in the toy room at the United Board of Missions. (Mary Meaux/The News)

As the United Board of Missions works to fill the everyday needs of the under-privileged, officials are also looking to connect with new churches and add more volunteers.

UBM is a faith-based non-profit offering help with food, clothes and utility bills as well as assistance during the holidays and back-to-school season.

On a busy Monday, volunteer Felicia Lognion spoke with a client at the front lobby window. Her desk in front of her held folders, paperwork, a calendar, computer and more.

Over the past weekend there were more than 90 voicemails from people seeking assistance, UBM Executive Director Debbie Perkins said.

“We have a steady stream coming in every day for food and clothing, and we help them through the Missions Attic. The Attic is also for resale to help bring funds back to UBM, so it’s not all giveaway,” Perkins said. “We’ve been so fortunate to receive fabulous donations this year and it has really helped sustain us in this shortfall year.”

One of those donations came earlier this month from Golden Pass LNG and EPC contractors. The group donated one-and-a-half tons of nonperishable food.

UBM has two resale shops, The Missions Attic at 3300 Twin City Highway in Groves and a boutique with a higher quality clothing line, new purses and jewelry and other items at 5235 39th St. in Groves.

And while the organization is preparing for holiday assistance, they also must keep in mind the needs that are there year round. 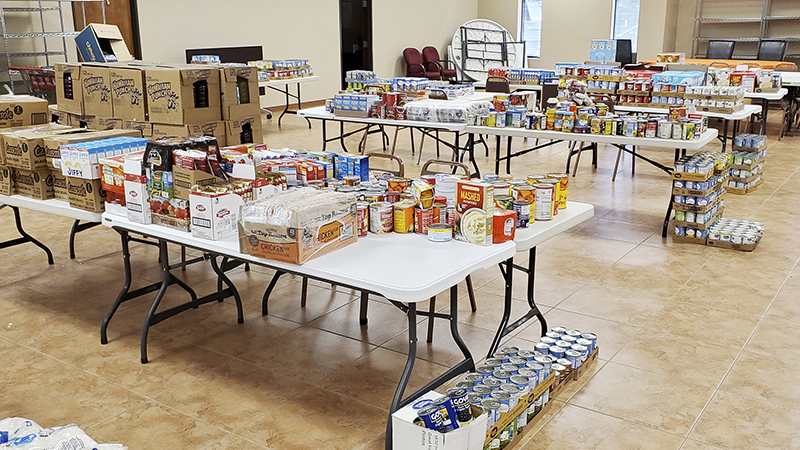 The needs of the organization

Perkins was busy this week sending emails to local churches in hopes of gaining more board members that in turn make up the organization.

UBM began as an outreach into the surrounding community of Port Arthur in 1967 by a group of laypersons from St. Mark’s United Methodist Church, according to information from UBM. The organization is a “coalition of Mid and South County churches and dedicated volunteers.”

Due to the way the UBM is organized, it only allows local church members on the board, Perkins said.

“Due to all the changes in the world over the past several years, we really lost our members,” she said “We rely on them for monetary support, volunteers and to spread the word. We’re doing grass roots again to get back to where we came from.”

There is also a need for volunteers for a number of duties, such as clerical, clothing store, food pantry, Meals on Wheels, Share-A-toy, sorting donations and furniture pickup.

For those in need or who want to volunteer, go to the UBM office at 6650 Ninth Avenue in Port Arthur. It opens from 9 a.m. to 1 p.m. Monday through Thursday.