Bulldogs have playoff success on their basketball agenda 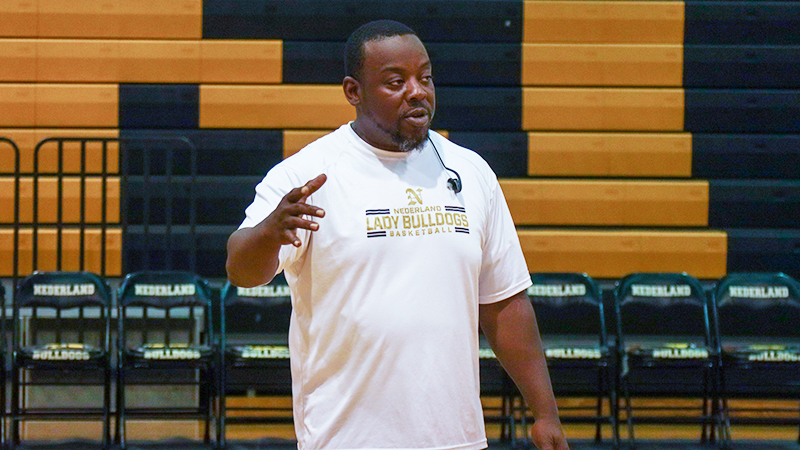 NEDERLAND — The Nederland Bulldogs girls basketball team made the playoffs last season, but were not able to get past the first round. This season, head coach Jody Walker and his team hope to build off that foundation.

The team returns all but two girls from last year’s squad.

Walker said the start of basketball season is always bitter sweet as he is also a position coach for the football team.

“We have been waiting for this moment since Aug. 12,” he said. “I’m just switching hats from the field to the court…I am excited. We will have 12 girls on varsity. It is great to have the experience, but at the same time, we are still learning.”

The Bulldogs have made the playoffs for the past two straight years, but Walker said he wants to see his team take the next step.

“As a coach, you would like to think (the playoff experience) helps, but a first-round exit is not always good,” he said. “We want to understand the next phase.”

Along with the varsity players, the Bulldogs feature a large program with 24 freshmen athletes.

“That is very good,” he said. “They competed in the Bridge City tournament and won first place this past weekend.”

Walker did not comment on whether any freshmen had a potential to get called up to the varsity level.

“It is a great group of girls,” he said. “It is exciting to have that many girls excited about basketball.”

“We have Ava Wiltz, who is a two-year, first-team all-district performer,” Walker said. “We have Maggie Baker, who also is a first teamer for two years. Ke’Asia Hall has been all-district.”

Hall didn’t play with the team last year but contributed in previous years and hopes to contribute to the team’s playoff push.

“It feels good to have everyone back together,” she said. “Everyone is positive and everyone is on one accord. If you have that, it can only go up from there.

“If we trust each other, we can move on in the playoffs.”

Devyn Burk transferred to Nederland from Kirbyville this season. She has never played in the playoffs, but hopes to achieve that goal with the Bulldogs.

“I love playing basketball,” she said. “Because of my injuries, I dropped a lot of sports but I have stuck with basketball. It helps me relieve my anxiety. When I am out on the court, I don’t worry about anything. This helps me through a lot of things.”

Burk, who plays on the wing position, looks to bring a defensive mentality to her new squad.