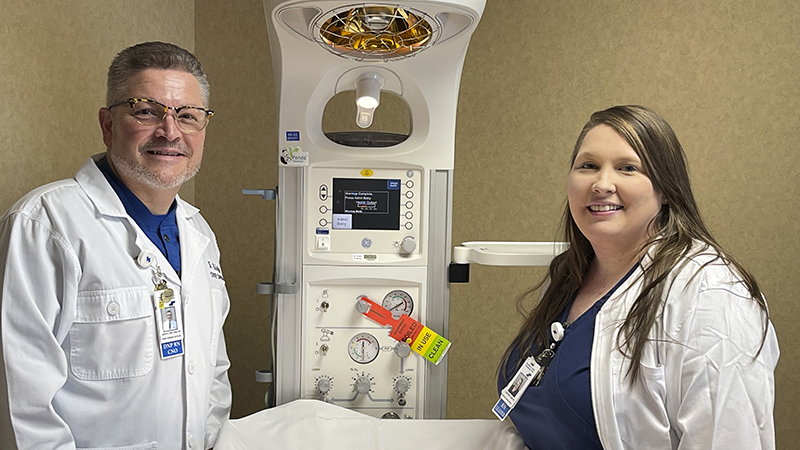 The Medical Center of Southeast Texas is celebrating a life-saving change after recently earning a Level III designation for the facility’s Neonatal Intensive Care Unit.

Previously, there was only one Level III NICU on the immediate path between Houston and Louisiana, resulting in severely premature or babies with certain conditions to be taken out of the area for treatment.

“I used to do NICU transport and that’s so stressful — not only that you’re taking the baby away from (the parents). You’re traveling hours sometimes either in a helicopter or the back of an ambulance with a tiny little infant that you’re having to do everything for,” said John Kight, chief nursing officer. “So it prevents some of that trauma as well.”

In Texas, NICUs are designated on four levels with IV being the highest. According to Texas Health and Human Services, the closest level IV NICUs are at Texas Children’s Hospital and The Women’s Hospital of Texas. Babies born at the Medical Center of Southeast Texas requiring Level III or higher care were previously brought to one of the aforementioned Houston-area hospitals.

However, the new designation allows for care not previously available to parents in Jefferson County.

“It reunites families here,” Kight said, explaining the stress it eliminates from situations when babies were previously taken to an out-of-area hospital. “If they have a sick baby they’re not going to have to … drive hours plus traffic to see their child. Plus I think it goes to show the high caliber of care that we provide here in Port Arthur.”

Christian Irion, women’s services director, said the Port Arthur NICU unit has a 24/7 neonatologist that stays on site and sleeps near the NICU and C-section suites for instant access in the event of an emergency. They also provide speech pathologists, occupational therapists, physical therapists and a designated respiratory therapist that works strictly in the NICU.

“Mothers are able to visit their babies as soon as they have reached NICU and are stabilized,” she said. “Now with visitation changes, they’re also allowed to have a support person in there with them. So if they’re a little emotionally distraught with their baby being in NICU, they have that support person. The mothers can see and speak to the nurses, see the procedures, be at bedside to monitor their child. It helps give an ease of mind to them.”

And that’s specifically enhanced, Kight added, by a social worker “who is there to be the calm in the midst of the storm” and nurses specifically trained to work not only with the babies, but to help educate and support the parents.

“And being a community hospital, also, these are people that they go to church with, people that you live next door to,” he said. “You have friends, family and church members that are taking care of your baby; so you’re still at home.”

According to a report from Texas Children’s Hospital, Level III NICUs are available to provide comprehensive care for seriously ill newborns.

“I’m still new to this area, coming from Baton Rogue, Louisiana,” Kight said. “Coming here and being able to see a hospital in the middle of Port Arthur that not only has the other services we have, but to be able to offer a Level III NICU — this is what you usually see in big cities. It’s such a value to the community, and it’s a value to the babies.”