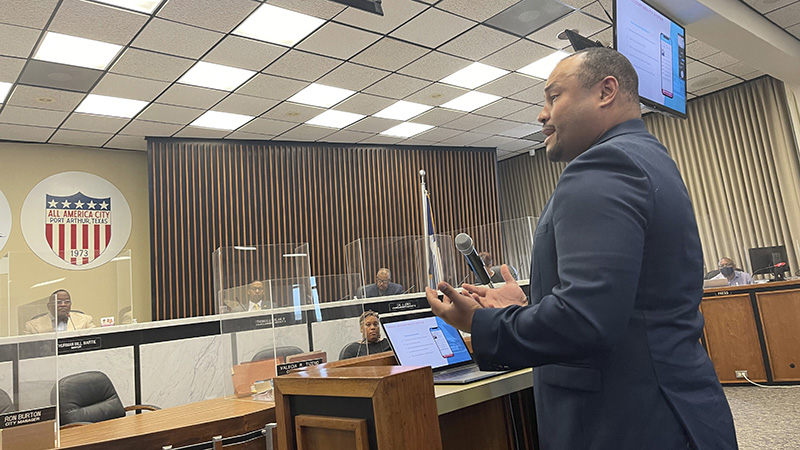 The City of Port Arthur could soon become one of three in the state to serve as a pilot program for a smart phone app that allows police officers and residents to interact without being physically near each other.

Dimitri Roberts of StevenStar, Inc. spoke to City Council this week regarding the app, Protected, which works to reduce police-to-resident interactions.

“My presentation will cover both my application, a little bit about my background, and some technology that I believe — from both my experience personally and professionally — will help to bring a new wave of reform to the justice phase, but also help better protect both our citizens that I swore an oath to serve but also as a citizen now to help keep me and my family a little bit safer moving forward,” Roberts said.

While his company is based in Houston, the company founder is a retired Veteran who served seven tours in Iraq as an intelligence officer before serving as a police officer and later a law enforcement analyst.

“But long before that I was just a young black kid on the south side of Chicago who suffered at the hands of police abuses,” he said. “Fortunately I had folks and good parenting around me, and I became a police officer in the same neighborhood that I grew up in.”

However, that experience provided an internal look at the situation, learning how difficult it was to be a police officer in an underprivileged neighborhood. And from that, he aimed to improve officer-resident interactions.

“We all know the problem as it results to police and community interactions — they’re just simply unsafe,” Roberts said. “And by the numbers, roughly 20,000 citizens and over 5,000 police officers are injured or killed every year as a result of interactions both with themselves and with the citizens that they serve. Eighty percent of those happen during traffic stops, so that’s roughly every 30 minutes in the United States that a police officer or citizen is injured during an interaction. Our goal is to help make that a little bit safer.”

Protected is an app available for Android and Apple phones that allows police and residents to voice/video chat instead of interacting face to face. In the event of a traffic stop, the resident is provided with a photo of the officer, their name, badge number, the reason for the stop, the option to notify friends and family that a traffic stop is underway, record the interaction, receive a receipt of the interaction, rate the experience and file a complaint if necessary.

The officer is provided with the driver’s name, photo ID, insurance information, history on previous positive experiences with the person, the ability to issue electronic citations and the ability to file a complaint.

At no point will the driver or the officer need to leave their respective vehicles.

The app also provides access to laws related to a citation and the ability to pay the ticket with the push of a button.

“We get this from both sides of the aisle — as both public servants but also as citizens of the communities…that we continue to serve but we care about very passionately,” Roberts said. “With that I think it is very appropriate that we take a dual-sided approach to these issues.”

Port Arthur was chosen as one of the three cities in three states to pilot the program after Roberts met a fellow veteran with family in the city that now serves on his advisory board.

The goal is to be operational in a multitude of cities by September 2022.

The data is stored in the company’s database and would be accessible to city officials as determined.

“Just to address that, I have had several meetings with the chief,” Roberts said. “And I think in one of his meetings — and I don’t want to misquote him — but I believe he said, ‘let me know when I can start using this.’”

Duriso on Friday confirmed that PAPD has received the information and the program is under review.

“It’s something that we’re looking at,” he told Port Arthur Newsmedia. “We’re still trying to…work out some details.”

Two of the challenges, he said, was the inability for those without smart phones to use the program, and ensuring the residents “buy into it.”

“I can see how I would want my grandchildren or my sons to use that so I can be sure that they get home safely,” he said.

Roberts said the program would come at no cost to the city.