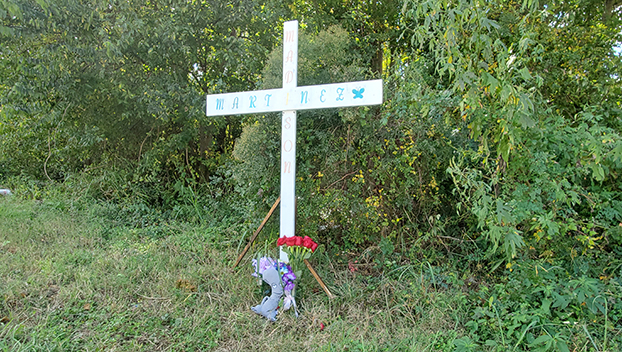 A cross bearing Madison Martinez' name was placed in the 6700 block of Ninth Avenue diagonal from the area she was fatally injured. (Mary Meaux/The News)

As family and friends prepare for a remembrance service for a Port Arthur woman killed in October, the Nederland man police believe is responsible for the death is behind bars on a charge of manslaughter.

Lonnie Rodgers, 46, is being held on a $500,000 bond in the Jefferson County Correctional Facility.

Port Arthur Police Det. Sadie Guedry said Rodgers was encouraged to turn himself in and did so Thursday. 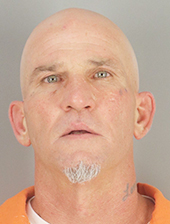 The victim, Madison Martinez, 27, was found at approximately 9:29 a.m. Oct. 15 in the area of Lake Arthur Drive and Ninth Avenue after possibly being thrown from a vehicle, Port Arthur police said.

She was unresponsive at the time and brought to a local hospital, where she died the next day.

A thin wooden cross bearing her name was placed in the 6700 block of Ninth Avenue diagonal from the area where she was fatally injured. Flowers and a stuffed cartoon character lay at the base.

According to her obituary, Martinez was a “people person with a strong and confident personality and when she set her mind on something she would not stop until she reached her goal.”

Social media posts by her family show her organs were donated and helped save four lives. 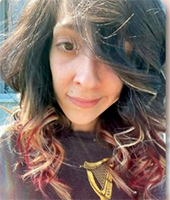 Condolences posted on Meloncon’s Funeral Home – Nederland’s website tell of a woman who touched many lives.

Tina Boneaux posted: “Sweet beautiful Madison. You had such a huge personality, brightest smile, and big heart. Your presence will truly be missed. Fly high beautiful Angel watch over your family and keep them safe beneath those big gorgeous wings you’ve earned.”

“You knew how much I loved you. God brought us into each other’s life under the most unique circumstances in order for us to share the love we both needed to give,” the post read.

“Thank you for the trust and respect you gave me and the opportunity to be a part of your life. I know you are no longer hurt or alone. You were so loved and unfortunately were taken far too soon to be healed. Flying higher than the stars that gleamed through your eyes. I love you and will always be grateful for your love.”

Donald Martinez, father of Madison, described her as a trendsetter who dressed in her own way, creating her own unique outfits. He called her very talented.
She was a Nederland High School graduate.
“She was a good person and had so many friends. I didn’t realize how many friends she had,” Donald Martinez said.

An arrest warrant for manslaughter was issued Wednesday for Rodgers.

Police are not saying if there were any other individuals in the vehicle at the time of the incident or if witnesses are being cooperative, adding this is an ongoing investigation.

Police are also not commenting on the relationship between the two individuals, or if additional arrests are expected.