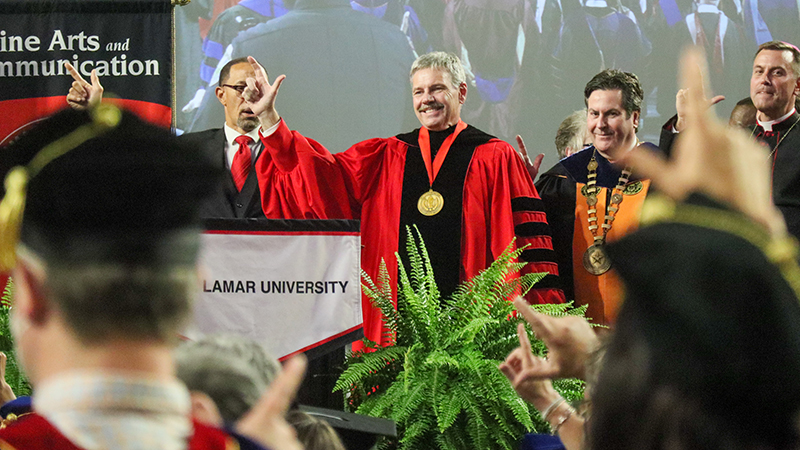 Taylor was announced as president of the area’s largest university in July, following Kenneth Evans, who held the position for eight years.

In his speech, Taylor gave a message to Beaumont, Mid County and Port Arthur about the potential of the area. 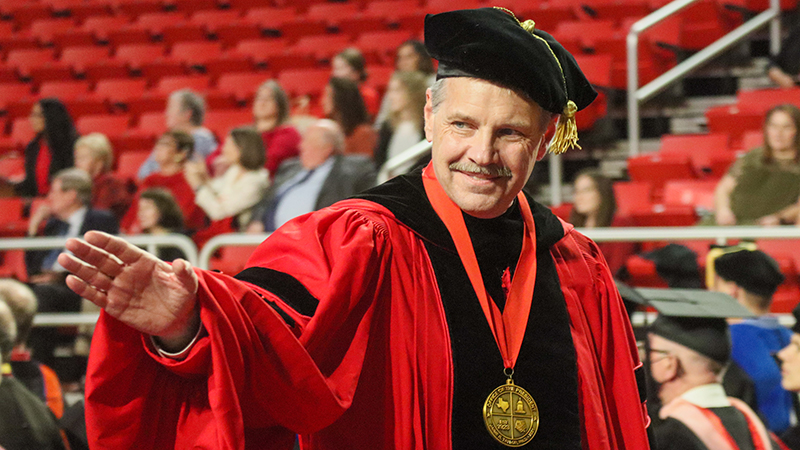 Jaime Taylor waves to members of the faculty at the Montagne Center. (Chris Moore/The News)

The ceremony involved Taylor being presented with a robe and pendent. During his speech, he talked about how proud he is to be a part of the area’s rich history, dating back to Spindletop.

“The nation was never the same after the first oil geyser here in 1901,” he said. “Southeast Texas suddenly had a major power source in the modern oil industry. Beaumont quickly became a boomtown, and rapid population growth required equally rapid development in housing, healthcare, schools and retail… Very early in the boom, school leaders saw the need for higher education right here.”

He applauded the area’s past leaders for having the foresight to see the importance of higher education to prevent the thriving Southeast Texas from becoming a ghost town.

“The power of Spindletop could be transformed and maximized through the power of learning,” he said. “… Lamar University’s story is remarkable and it is only in its first 100 years. What is the next 100 going to look like? I came here because I believe we can build further on the region’s rich history of entrepreneurial thinking. There are so many good things happening here, and there are so many strong academic programs.” 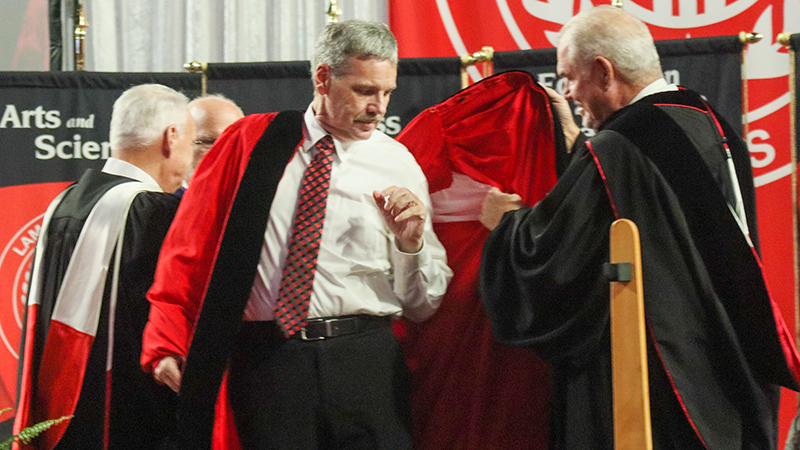 Jaime Taylor puts on his robe during his investiture at the Montagne Center. (Chris Moore/The News)

Speaker of the Texas House Dade Phelan was in attendance. He spoke about his goal to go further.

“It is with this strong foundation that we move forward with Southeast Texas, this university and this state,” Phelan said.

“…Having served in the Texas House of Representatives for many years now, I can say that Lamar University has served this state’s economic growth… I look forward to this university’s expansion in the years to come. I welcome President Taylor to the university and to the state.”

Taylor served as provost and senior vice president of academic affairs at Marshall University in Huntington, W.Va. since 2018.

Prior to his work at Marshall, Taylor was at Austin Peay State University, where he served two years as interim provost and vice president for academic affairs, eight years as dean of the College of Science and Mathematics and eight years as chair of the Department of Physics and Astronomy.

Taylor was an award-winning teacher of physics and was honored as an Austin Peay State University Outstanding Alumni.