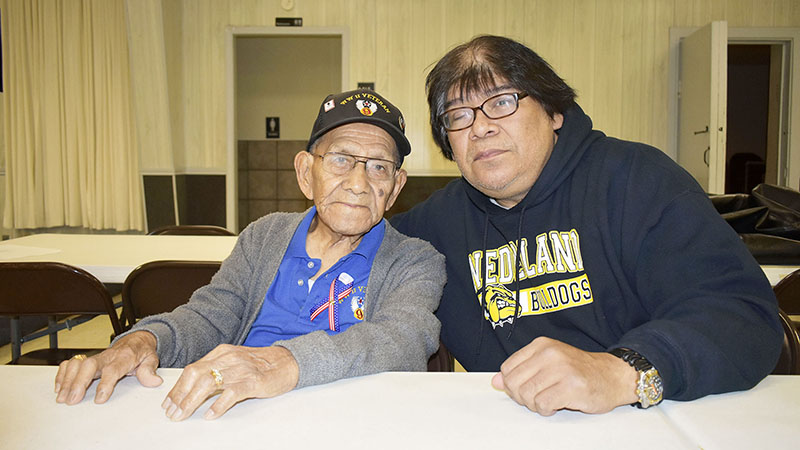 A local World War II veteran will be honored later this week for his contributions.

The veteran, Patrick Aguilar, is now 98.

The event grew out of an oral history project conducted by Lamar University graduate students Tishia Hubert and Joseph Akers. The two are writing a scholarly article, placing Aguilar and his service in the context of the local Mexican-American community, according to information from LU’s professor of history Rebecca Boone.

Hubert and Akers are also veterans and wanted to honor Aguilar’s contribution to history and raise awareness of the local Latino/Latina community.

I met Aguilar and his son Glenn in 2018 at a program put on by Our Lady of Guadalupe Senior’s Club.

The veteran was a member of the Army Air Corps 9th Division and served from around 1942 to 1945, then went back as a reserve for one year.

Aguilar is the last of five brothers who served in the military: Santos Aguilar, Frank Aguilar, Raymond Aguilar and Ignacio Aguilar were the others.

I remember sitting across from Aguilar and his son and learning of how the man enlisted in the military at age 18 before he graduated from Thomas Jefferson High School. His friend was going to enlist so he told him to wait for him because he was going to the movies first.

Aguilar’s family has chronicled some of his military experiences, including this one:

“Once I was on a ship being lowered on rope ladders to the boats below to take us to land. We set up our tents and slept overnight.

“The next morning we went to Cherbourg, France, where they were building an airfield. At night we could hear cannons going off.

“A Jeep with two men went down the street with a machine gun mounted on the Jeep and as they started to fire, the gun jammed. Fortunately, the German plane kept on going and we were saved from any fighting.”

Glenn Aguilar said in the 2018 story he often asks his dad details when watching movies and learned that next to the tents in Cherbourg there was a trench the airmen could roll into and grab a rifle, if needed.

I think of this man and other veterans at war at the age of 18 and think of myself at that age. I had the usual teenage thoughts of worrying about grades, Friday night football games as member of the Maroon and Gold Pride (band), and goo-gooing over my boyfriend (now my husband).

The veterans had to grow up quickly not knowing if they would make it home to their loved ones.

The RSVP date for Aguilar’s reception has already passed, and the event is Sunday. I’m thankful for the reception that, as Professor Bone said, will serve to create a chain of living history linking generations together.