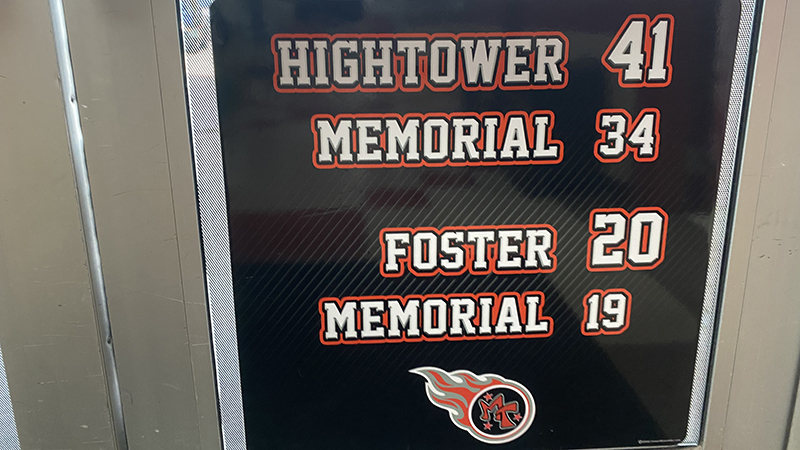 The sign featuring two upset losses in the first round of the playoffs hangs in the Titans' field house. Chris Moore/The News

The scores of two games are printed on posters in the Memorial Titans locker room. One is placed in the weight room, and the other is located on the door for players and coaches to see when they exit the facility.

The last thing the Titans see when they leave the field house is “Hightower 41 Memorial 34” and “Foster 20 Memorial 19.”

The signs represent missed opportunities for a program that has not won a playoff game in three years despite being the favorite in 2018 and last year.

Last season, the Titans had the first undefeated regular season in school history, rolling through the district.

The team had watched film from the 2018 first round playoff game against Foster to illustrate how penalties could derail them. The Titans then racked up 12 penalties for 128 yards and gave up three fumbles.

In 2020, the Titans entered the game against Hightower, who came in fourth place in its district, as the prohibited favorites. However, Memorial fell behind 20-6 early and had to fight its way back.

A diving two-point conversion knotted the score at 34-34 with 1:18 left in the game. In the final seconds of the game, Hightower connected on a 51-yard pass for the go-ahead score.

This year, returning 14 of 22 starters from 2020, Memorial Head Coach Brian Morgan said everything was about the playoffs. He said the team did not dwell too much on Friday’s loss to Friendswood, even though it cost the team an outright district championship. The loss also gave the Titans the No. 2 seed in the district.

“The players were frustrated and embarrassed,” he said. “I didn’t have to tell them much.”

Morgan said the team quickly shifted focus towards a playoff run, which added new narratives when the team learned they would have another chance to right the wrong of last season against Hightower.

“I actually like it,” Memorial quarterback Jah’mar Sanders said of playing Hightower. “We have to get the redemption. They sent us home early last year. It is time to return the favor.”

Morgan said Monday was the best practice his team had in four years.

“They were very focused and know we screwed some things up,” he said. “Then, you add Hightower, who kicked us out last year. It was a combination of things. It will be a good test on Friday night.”

Morgan said the game is far from a layup for the Titans.

“There are going to be a lot of good players on that field Friday night,” he said. “There are a lot of D-I athletes that will play in that game.”

Hightower is not a typical No. 3 seed. The team finished in a three-way tie for first place with a district record of 7-1, but earned third place due to the point differential in a loss to Paetow.

Hightower’s record doesn’t change the Titans’ desire to win or the belief they can snap the streak.

“We take every game seriously and prepare as hard as we can,” Sanders said. “As far as the first round goes, yeah, we hold this game a little different. This is the rematch. We have to win this time.”