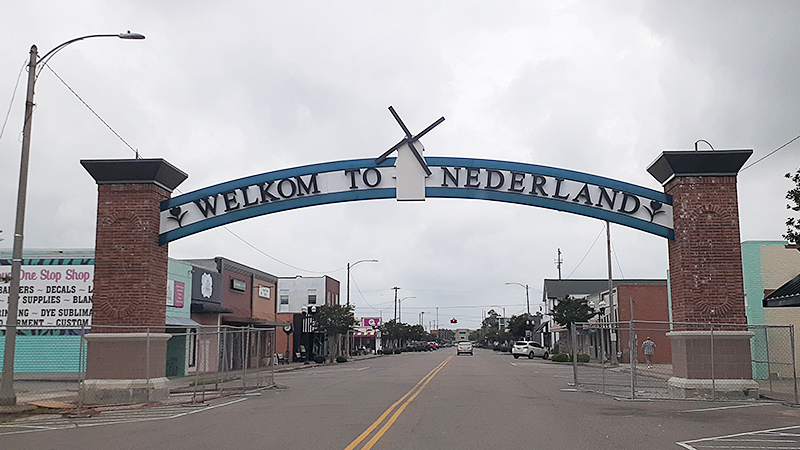 NEDERLAND — The “Welkom To Nederland” arch isn’t quite City of Nederland property, casting a small amount of doubt into what the ultimate resolution would entail.

It’s the EDC that used its taxpayer-generated revenue to design and construct the arch on Boston Avenue just west of the intersection with Twin City Highway.

After hearing some concerns about the project still not being finished, Root told the EDC board this week the project would get settled as planned.

Nederland City Council members approved construction of the $179,200 archway late in 2020 after the EDC touted it as a showpiece and talking point that would create a grand entrance for a redeveloping downtown.

The structure was built on City of Nederland land and will ultimately be turned over for the City’s general fund to pay for maintenance as needed in the future.

Because the City will be accepting the arch, City Manager Chris Duque said City staff has been involved in the final inspections, which resulted in “discovering minor and a couple of significant issues requiring repairs. This was in addition to the issues identified by the project architect.”

Duque said the most serious issue was seeing water entering the structure, which was identified during the city building official and the public works director’s inspection.

“Some of the noted repairs are still not complete to the satisfaction of the project architect, the NEDC or the City,” Duque said. “Once notified of the necessary repairs, the contractor has worked to address them. This is a process in finalizing a project’s punch list.

“It is imperative that the condition of the arch at minimum meets the bid specifications when this donation is completed.”

Mayor Don Albanese, who is also an EDC board member, asked for an update on the process this week.

EDC Executive Director Kay DeCuir said some of the final issues come down to a city request to have the structure powder coated, which conflicted with an EDC effort to paint it, leading to a potential additional fee from the contractor.

“That’s been a problem,” DeCuir said. “If we had just painted it, we wouldn’t have the issues we have.”

There are differing statements expressed by the EDC and city manager’s office over the requirement to have the arch painted.

DeCuir told the EDC leadership she does not think the board should pick up the expense of repainting the arch on the top and bottom.

Duque told Port Arthur Newsmedia, the City has not said it must be repainted to accept the arch, adding “the issue was pointed out and the contractor has proposed a resolution to correct the issues.”

DeCuir told EDC board members some of the city’s requests are nitpicky and a possible but unlikely worst-cast scenario could be dismantling the arch and doing away with the project.

In closing the discussion, Root said that would not be necessary and a positive outcome would prevail.