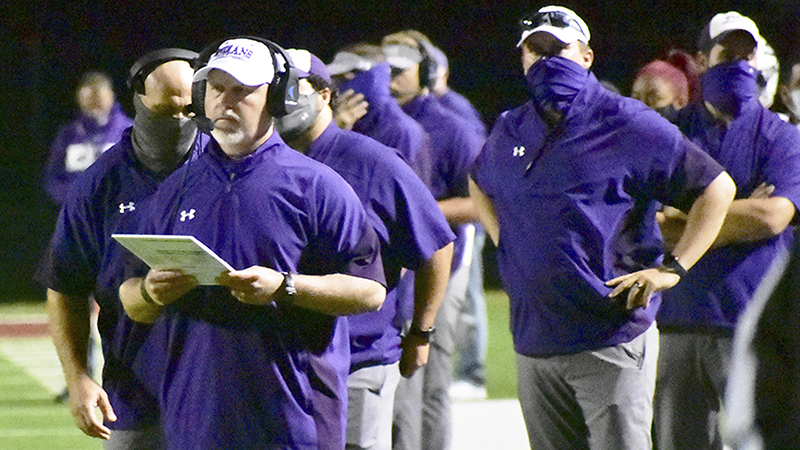 PNG head coach Brandon Faircloth, with notes, has a play radioed in during the first half against Beaumont United in 2020. (I.C. Murrell/The News) 10-2-20

The millstone achievement helped push PNG into the playoffs for the ninth consecutive season.

Faircloth, who just completed his 13th season with the Indians, said he did not do it alone.

“It is a collection of a lot of people,” he said. “As soon as I got to PNG, I realized that when you are a part of the PNG program, you are a part of something bigger than yourself. The first group I would thank would be the players. I have been blessed with amazing players that work hard and do great in the classroom. The second group is the coaches. They are great men, who care about their players and are role models for the players. They are willing to do whatever it takes to make their position group successful.”

“Last night was a really special night,” he said. “We played really well and were able to get every single person on the team in the game. Obviously, it is special for me and my family to have my son, Cooper, on the team. To be able to accomplish this with him on the team was special. I have known most of these players their whole lives. Cooper grew up with these kids and to accomplish it with this group is very special.”

“They are the greatest fans in the state of Texas,” he said. “We couldn’t do it without them, as well. Anywhere we have been, whether home or away, they always show up in droves and support us. We wouldn’t be able to do it without them.”

Faircloth will go for his 101st win against Galena Park in the Bi-District round of the playoffs.