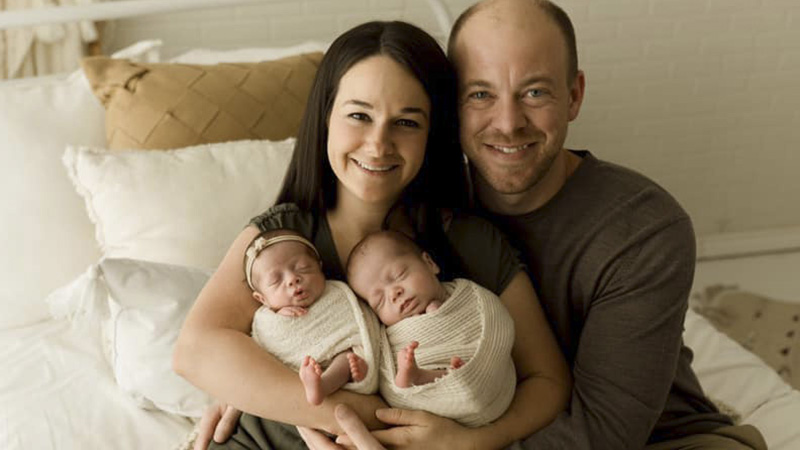 Morgan and Austin Miller with their twins Evelyn and Alexander. (Courtesy photo)

In the last few weeks, Leo Weeks Photographers owners Morgan and Austin Miller have been spotted on sidelines shooting pictures — each wearing one of a set of twins in a wrap as they work.

But the sweet sight is one that almost didn’t happen.

Born long before their due date, their premature birth put the babies at instant risks from breathing and heart problems to long-term issues such as cerebral palsy and impaired vision and/or hearing.

Morgan’s water broke on July 7, and there was no stopping the twins — due in late September — from being born.

“The plan was to keep them in as long as possible to give them a little more time to grow, but Evelyn was coming anyway,” she wrote on social media two days after their birth. “Right now, both babies are doing well for how early they came, but needless to say, they will be in the (Neonatal Intensive Care Unit) for a good while. Please say a prayer for them both to grow stronger every day so we can bring them home with us.”

And on Aug. 30, after 53 days in the Christus St. Elizabeth Hospital NICU, they finally arrived where they belong — at home.

Evelyn and Alexander are two of more than 80,000 babies born at the Beaumont hospital in the last 40 years, according to information from Danielle Pardue, director of marketing and communications for Christus Southeast Texas Health System.

But those “life changing experiences have taken a toll on the Mother and Baby Unit,” the statement from Pardue said.

So for the month of November, the foundation is hosting a Month of Giving campaign to help renovate the department.

Birthing services at the facility come with a mother baby clinic, support with breastfeeding, access to lactation consultants and neonatal services. The women’s pavilion has private recovery rooms that include a multitude of amenities.

They also operate as a Children’s’ Miracle Network Hospital.

In addition to providing donations of any amount, those at $10,000 and $15,000 will allow the donor to name a patient room in honor of a child or grandchild.

And it’s the aforementioned services that help families like the Millers bring their babies home.

In September, photographer Aubree Snipes shared a photo of the couple with their children swaddled to their chests.

“At what should be 38 weeks gestation, here they are, two weeks from being due but have been thriving on Earth for nearly 3 months,” Snipes wrote. “Such little fighters.”