Memorial shares district title, drops to No. 2 seed after slugfest with Friendswood 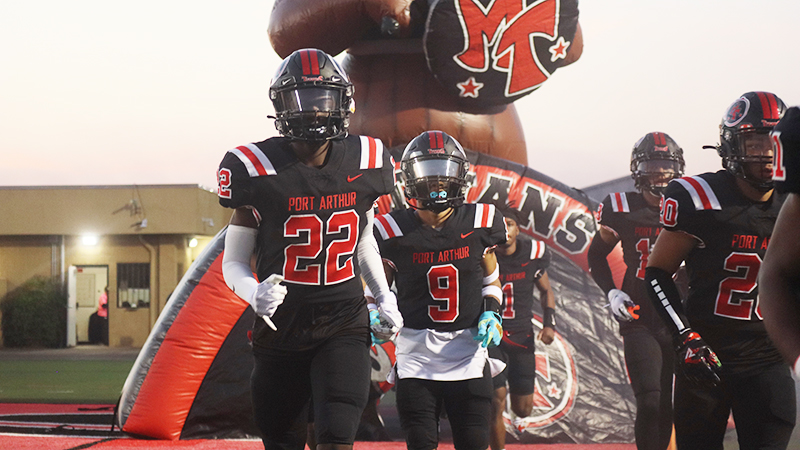 After the game, Friendswood head football coach Robert Koopmann compared Friday night’s gridiron showdown to an old-school 15-round boxing match, and it was his Mustangs who landed the knockout blow against their weathered opponent.

Friendswood nearly perfectly executed a game plan of limiting the offensive opportunities for an explosive Memorial Titans, and got a late defensive stand and game-winning drive for a 28-27 victory at Henry Winston Stadium.

The win gives the Mustangs football program its first district championship since 2010.

Trailing 27-20 and backed up to their own 6-yard line with 2:24 left to play, quarterback Matthew Dupuis ignited the Mustangs’ game-winning drive with a 40-yard pass to Hunter Smyrl, and kept his team moving with strikes of 18 and 16 yards to J.T. Roher.

With the Memorial defense showing signs of fatigue, a 9-yard Caleb Corkran run got Friendswood first-and-goal at the 2-yard line, and Corkran bullied his way to the end zone after that. The Mustangs then kept the ball in the big back’s hands for the go-ahead two-point conversion and a 28-27 lead with just 41 ticks left on the clock.

The ensuing kickoff was muffed by the Titans and recovered by the Mustangs to seal the win.

A huge defensive stand prior made the game-winning drive a possibility.

Memorial’s Jah’mar Sanders ripped off a 74-yard quarterback scramble to give the Titans first-and-goal at the 3, but a pair of personal foul penalties mixed with tackles for loss by Friendswood’s defense pushed them all the way back to the 40, where they punted on fourth down.

Memorial responded to an early Friendswood score with an eight-play 58-yard touchdown drive that ended with a 6-yard TD run by Sanders for a 7-3 lead with 53 seconds left in the first quarter.

Then, came a miscue for Friendswood when Titans defensive lineman Christian Thomas got a strip fumble and returned it 59 yards to the Mustangs’ 1-yard line. On the next play, Sanders barreled into the end zone for a 14-3 Memorial lead at the 9:36 mark of the second quarter.

The Mustangs answered with an 11-play, 65-yard, 6:33-long TD drive. A 27-yard pass from Dupuis to Smyrl on a fourth-and-7 play got Friendswood down to the Titans’ 1-yard line, and Corkran punched it from there for a TD to set the score at 14-10 with 2:57 remaining in the first half.

Memorial scored in one play from scrimmage to start the second half on a 41-yard TD run by Adrian Hayward for a 20-10 lead following a missed extra-point kick.

A 5:18 Mustangs drive ended with a 20-yard Pasqualli field goal to trim the lead to 20-13 late in the third quarter.

Another one-play Titans scoring drive — a 51-yard Sanders TD run — was answered by Friendswood with a nearly 5-minute drive highlighted by a 33-yard pass reception by Roher and capped by a 5-yard TD reception by Smyrl for a 27-20 score at the 7:23 mark of the fourth quarter.

— Written by James LaCombe of The Galveston News.