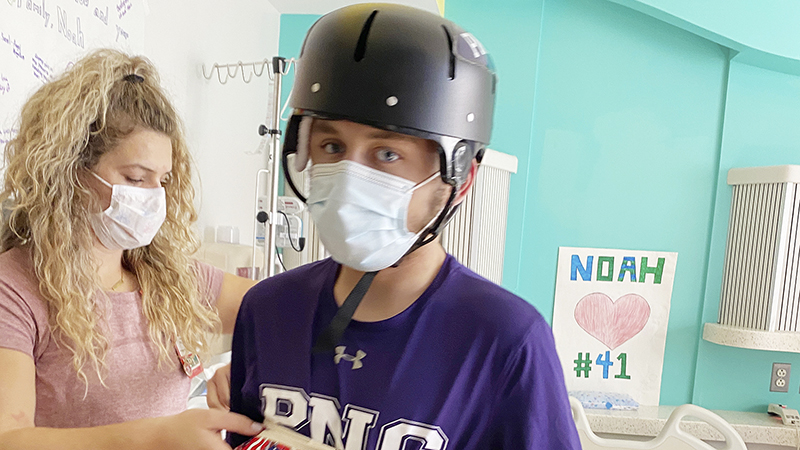 HOUSTON — Nearly a month after a collision during a football game caused Port Neches-Groves junior varsity player Noah Jackson a brain injury, the sophomore is recovering in a Houston hospital.

Jackson was life flighted to Texas Children’s Hospital Oct. 14 after a collision during a kickoff return.

His daily schedule involves physical therapy sessions, meetings with different specialists and looking over thousands of cards sent to him. Jackson said he misses being around his friends and family.

Jackson began assisted-walking last week as part of his rehab, and doctors believe he will be able to return home at the beginning of December.

During his rehab he wears a helmet to protect his brain. Doctors had to remove part of his skull to allow for swelling and have not replaced it, yet.

The 15-year-old told Port Arthur Newsmedia he has been tired from his busy schedule.

“I have been working on everything,” he said in reference to his physical rehab. “I have been walking a lot. I walked up stairs. I threw the football.”

Jackson stretching is the most difficult part of the rehab due to his muscles tightening.

He has been able to keep in touch with some friends through texting.

Jackson does not remember anything about the game and did not know what happened until he woke up from a medically induced coma.

Despite the incident, Jackson said his love for football is not wavering. 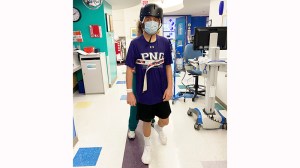 “I am proud of him for doing it so quickly,” she said. “He has been meeting and exceeding every goal they set for him. The therapists brag on him daily and talk about his great work ethic.”

Borne said the community support has been overwhelming. Jackson’s hospital room has walls and shelves covered with signed cards and posters.

“Each day there is more and more support from our community as well as surrounding communities,” she said. “I love how this has brought so many people together for one cause. Yes, this has been a tragic accident for Noah, but there has been so many positive things come from it.”

Borne said her son’s story stretches across the country, as people reach out to her to let her know how his story has touched them.

“We may never know why God allows things to happen, but we know it is all for his glory,” she said. “I thank God every day for all of the love and support we are receiving.”

Earlier this week, nurses working at Texas Children’s Hospital who attended Port Neches-Groves High School, threw a surprise pep rally for Jackson — cheering for him as Cherokee played in the background.