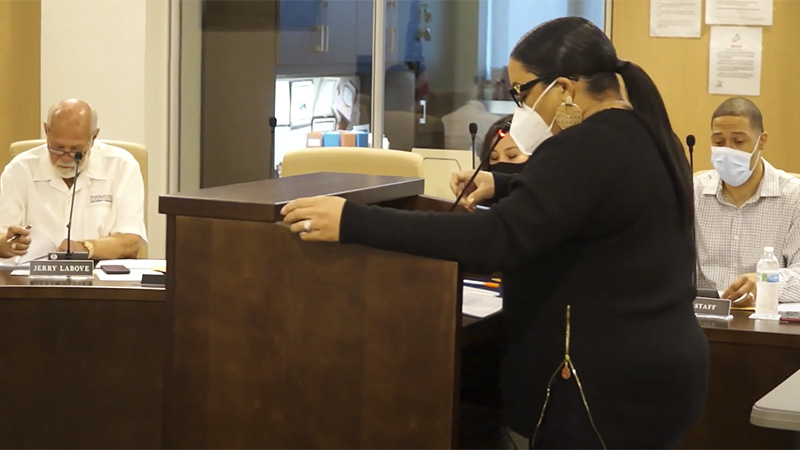 During a monthly report to the Port Arthur Economical Development Corporation board this week, Workforce Development Manager RaNoda McClain-Lee said half of the students in the department’s CDL program obtained employment.

The organization is partnering with Lamar State College Port Arthur to help locals find employment in a number of areas, which includes commercial truck driving.

Lee told board members 16 have completed the course and 19 are enrolled.

She also said after last month’s meeting, when only seven had completed, she checked on each to gauge the success of the program.

“I reached out to them and I am here to tell you that out of the seven, five had secured jobs,” she said. “To date we’ve had 16 complete the program, and out of the 16, eight have found a job. So 50 percent are currently employed.”

This will undoubtedly increase in the near future, when LSCPA completes design and construction on a program that will create the largest commercial driver examination facility in the state of Texas. It will be located on FM 3415 in Beaumont on a 24-acre tract near The Dream Center.

Announced Feb. 23, LSCPA said it was awarded a $4.3 million CARES Act Recovery Assistance grant to support the design and construction of a commercial driver education and examination center.

Dr. Ben Stafford, dean of workforce and continuing education, previously told Port Arthur Newsmedia the development is due to a partnership between the college and the county.

Lee said when she reached out to current graduates of the program, she passed along information on employment to the two who had not found work. She referred both a company that pays a minimum of $2,000 per week, she said.

Board member Beverly Raymond asked how the EDC advertises its workforce program.

“What are we doing to recruit students into the program?” she asked during the meting. “Do we go by social media? The schools? How do we get the word out that we have these different programs available for the students to participate in?”

Lee said social media is a large method of their communication, but their partnerships with surrounding learning institutions allows for additional advertisement.

She also updated the board on the EDC’s police academy program, which began last year.

Lee said Monday morning she had two women approach her for information on how to enroll.

“People are actually interested in our program,” she said.

For more information on workforce programs offered through the PAEDC, call 409-963-0579.