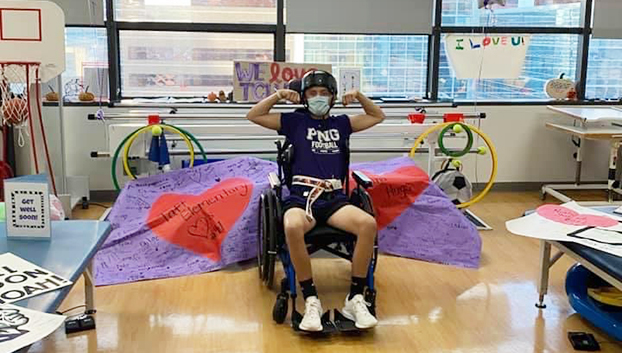 Noah Jackson shows off his strength during the recovery process Wednesday morning.

Recovering Port Neches-Groves football player Noah Jackson got quite the surprise at the hospital today (Nov. 3).

Jackson, who suffered a brain injury during a junior varsity game last month, was given a surprise pep rally at Texas Children’s Hospital in Houston, where he is recovering.

Family members said one of the nurses is a PNG aluma and had a room decorated in purple and white.

Staff played Cherokee for Jackson, who has begun physical therapy.

The 15-year-old sophomore is expected to be discharged from the hospital in early December, according to family.

Port Neches-Groves in position to put together special playoff…