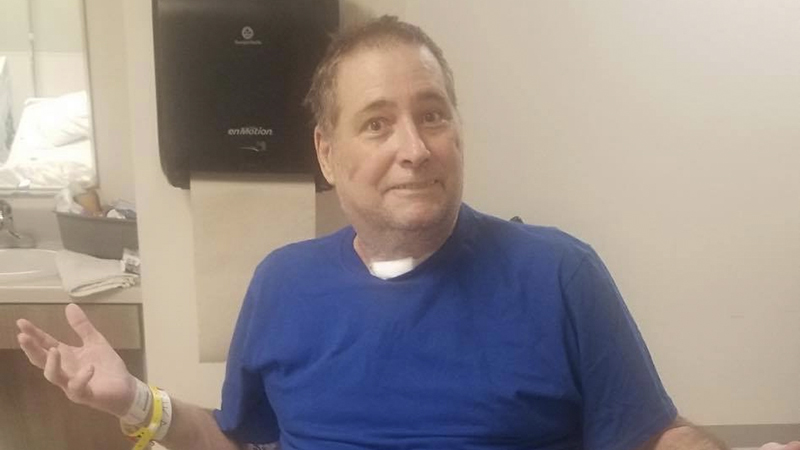 Joe Oates on Oct. 21, more than two months after he was admitted into a Houston hospital with COVID complications. (Courtesy of Mary Fuller)

After a three-month struggle with COVID-19, the local boss of all burgers is headed home.

“I am so excited,” said James VanDevender, friend of Boss Burger owner Joe Oates. “Me and my wife are just so elated. Joe was near death, and it was very, very serious.”

Oates was hospitalized Aug. 6 at St. Luke’s Hospital in Houston, where he was placed on a ventilator. And he remained on it for more than a month.

His wife, Mary Fuller, immediately began updating his status through social media, where residents from across Mid and South County followed and rallied for the beloved restaurateur.

The journey was not an easy one. 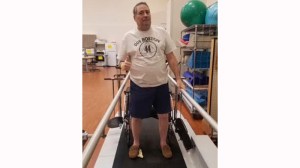 Joe, who often stayed in a medically induced coma, started showing signs of improvement in late August, when he was taken off the ventilator and began breathing on his own.

However, according to Mary, he was moved back to the intensive care unit just days later.

He gradually began to improve again.

“He has not lost his sense of humor,” Mary wrote Sept. 21, as she discussed the dry-erase board he was using to communicate. “We read through cards he has received. The most important thing he said today was, ‘I want to live.’”

Boss Burger has been a staple in the area since it first opened in 2014. While it began as a brick and mortar restaurant, it later became a food truck located at 2665 Aero Drive in Port Arthur.

It was through the food that James met his good friend.

“When he first started on Twin City Highway…I met Joe and Mary there,” James previously told Port Arthur Newsmedia. “I’m retired and got to talking to them and we became friends. Me and my wife, we do things with them. I love Joe and Mary. I look at them as family.”

On Oct. 21, Mary posted a photo of Joe sitting up in a wheelchair with a smile on his face.

“Joe is really working hard,” she said. “He dressed himself. At physical therapy he pulled himself with no help to standing between the parallel bars and took several steps.”

They took his tracheotomy tube out that day as well, she said.

“For him to come home out of that hospital (Wednesday), it’s amazing,” James said. “It’s a miracle.”

James said Joe is a Harley enthusiast who is looking forward to being back on his bike. But until then, he’s made one request for the next best thing.

He’s ready for a ride on James’ golf cart.