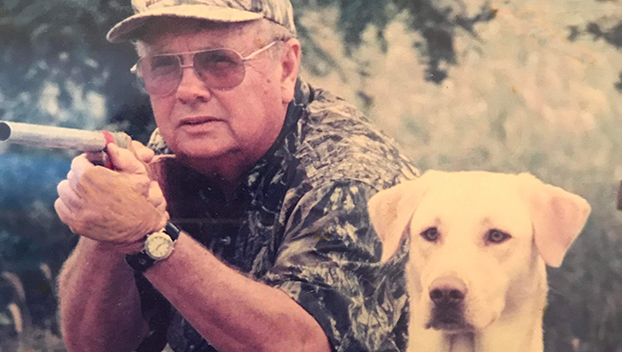 He graduated from Thomas Jefferson High School in Port Arthur in 1955.

Jay retired from DuPont Beaumont Works as an Instrumentation Supervisor (Nordel Unit) in the early ’80’s after 30+ years of service.

He then worked as an Instrumentation consultant at multiple locations in the U.S., the Philippines, and Bahrain, under Petrocon, Matrix, Williams Fire & Hazard, and Flo-Tron.

Jay was an avid hunter and deep sea fisherman. In the late 50’s, he enjoyed racing his ‘57 fuel-injected Chevrolet with his cousin and best friend Jim Steen.

Especially enjoyable were his field trial competitions with his champion yellow Labrador, Ranger, that he trained from a puppy.

He also loved activities with his sons and daughters, such as hot rod tuning, motocross racing, visiting A&M for various functions, and barrel racing.

His brief military service was at Ft. Sill, OK, as an artilleryman. Above all else, he cherished his family and loved being “Ampaw” to his 11 grandchildren and 11 great-grandchildren.

Survivors include his daughter Stacie Smith and son-in-law Darrell and their three sons, Taylor Smith, Adam Smith, and Nicholas Smith, and two daughters, Kelcie Oney and her family, and Savannah Smith; his son Mikel Bonin and his two daughters and one son, Teah Hill and her husband Steven, Shireen Bonin, and Mikel Bonin II, all from Gold Bar, Washington; his son Greg Bonin and his three daughters Blanche Isenblitter and her husband Chris, Erin Rayburn and her husband Joshua and Makenzie Bonin and her husband Gabriel and their families, all from Lumberton; and his daughter Linzi Miller and her husband Tory from Austin. Siblings are Sue Hack Moore from San Antonio, James Allen Hack from Missouri, Linda Jo Kingrey from Beaumont, Carol Lee Hammonds from Crystal Beach, and Randall “Randy” Bonin from Nederland. He was preceded in death by his father Felix J. Bonin Jr., mother Joyce Hack, and brother Russell “Rusty” Bonin.

In lieu of flowers, donations can be made to Alzheimer’s Association, a cause very near Jay’s heart, in honor of Barbara Bonin Carville.

Graveside services will be at Forest Lawn Memorial Park in Beaumont, TX on Saturday, November 20, 2021 at 10am.