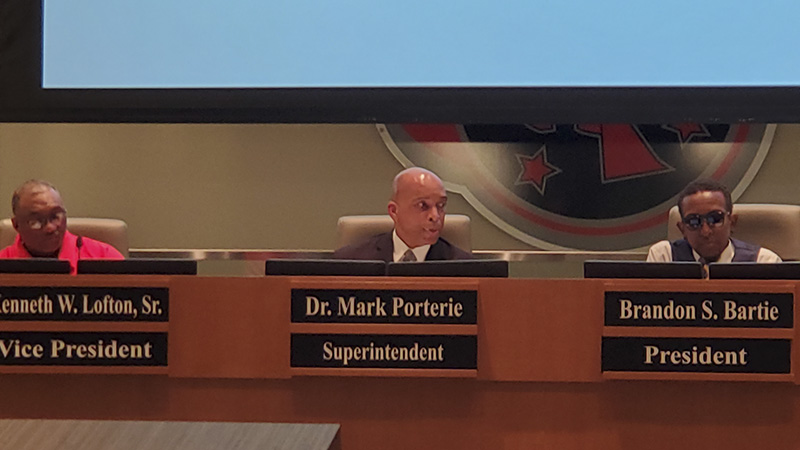 About a month ago, Port Arthur Independent School District dealt with fights related to the social media app TikTok.

Then there was a lull for two weeks before an isolated incident PAISD Superintendent Mark Porterie said shouldn’t have occurred.

The altercation was serious, he told the board of trustees and audience members Thursday night.

A week ago PAISD sent out a letter saying the district may seek criminal charges against students ages 14 and older who choose to engage in fights, the letter read.

But the district received questions on why they would incarcerate children.

He said incarcerating children is not the intent, but it is a public school system where students shouldn’t have to come to school in fear.

Porterie launched into the reason behind the letter, saying they have asked parents over and over to help with the issue — to stop the fights.

“However, if parents do not help us to do that, the chore, the job, becomes greater,” he said. “Some parents encourage their children to fight, and that is wrong. And yes, we understand if someone comes up to you and they hit you or do something that you have to defend yourself. We’re not saying don’t defend yourself.”

“But to attack someone without any reason, without trying to work it out first is wrong and for parents to uphold that is incorrigible.”

Throwing kids in jail is not the district’s intent, he repeated, but some of the students are out of control and if this is the only way to protect a majority of students and staff, this is what the district is going to do.

“So, one way or the other, we’re going to protect those students that come to school every day that want to learn,” he said. “They have an urge, and a quest and a thirst to learn math, science, fine arts, athletics, anything that we offer without interruption and without being fearful to come into the school.”

A news story out of Shreveport, Louisiana, of Dad’s on Duty caught the eye and imagination of several trustees who brought the idea to Porterie.

The group of fathers formed after 23 students were arrested in their school system in a three-day period for fighting. Administrators, police, campus security had all been unsuccessful in curbing the violence, Adrienne Lott, PAISD media/communications specialist, said.

The district is exploring something similar, though the issue was discussion-only.

The idea is Pops Patrol; Presently Available To Redirect, Often encourage & Listen to Students. The acronym can be changed, she said.

There will be criteria for the plan.

The dads would support staff by establishing consistent and additional supervision in school hallways, cafeterias and common areas, encourage a decrease in disruptive behaviors that negatively impact learning, boost campus morale and increase student attendance and self-esteem, she said.

But the men are not campus security or have experience in counseling. The hope is their presence promotes a positive learning environment.

Lot said in her proposal each member would be trained so they are knowledgeable of the district’s diverse student population and know how to address a variety of situations that may arise during the course of the day.

It is suggested their duties include greeting the students each morning, talk during breakfast, encourage students during transitions and wish them well as they leave. The only physical contact would be a fist bump with permission, she said.

Membership would be restricted to male volunteers age 35 and older who pass a criminal background check, full COVID vaccination is required.

Board President Brandon Bartie addressed the issue of the letter and is aware some parents are upset.

Bartie said the district is here to educate but not babysit, so that at the end of the school year the student will graduate and go on to get a degree.