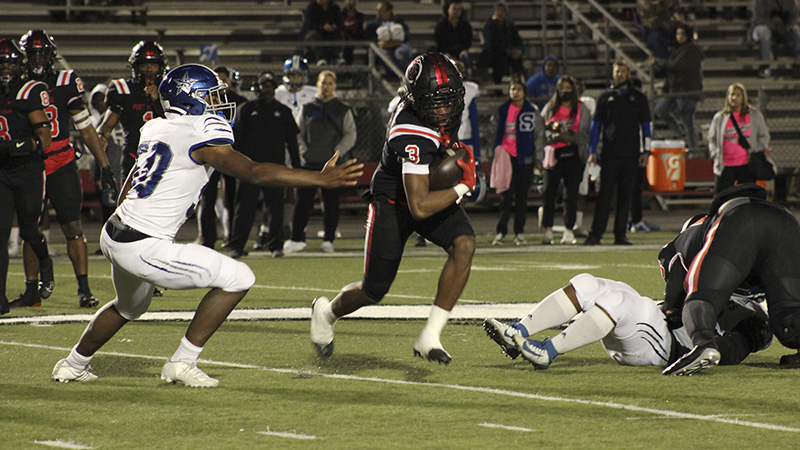 Memorial's Kelby Blanchette evades a tackle during the Titans' big win over Sterling. (Jackie Batson/Special to The News)

Jah’mar Sanders and Adrian Hayward each ran for more than 100 yards, leading Memorial to a convincing 48-13 win over Baytown Sterling Friday night in District 9-5A action at Memorial Stadium.

Hayward led the Titans ground attack with 135 yards on nine carries with one touchdown. Sanders rushed for 104 yards on 12 carries and one TD. He also completed 7 of 11 passes for 185 yards and three TDs.

Memorial improved to 8-1 overall and a perfect 6-0 in district play.

“We turned the ball over too many times,” said Memorial coach Brian Morgan. “We got up early in the first quarter and kind of lost focus in the second quarter. We were just trying to keep them locked in. In the second half, we got back to moving the ball and running the ball like we need to.” 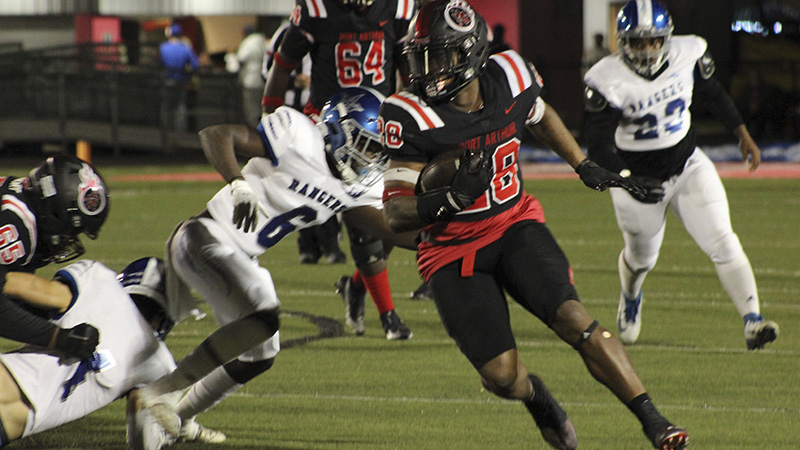 Memorial running back Adrian Hayward runs the ball. (Jackie Batson/Special to The News)

Trailing 28-0 to start the third quarter, the Rangers received the second half kickoff. The Titans defense picked up where it left off in the first half and forced a quick three-and-out.

Memorial’s offense came out firing on its first possession of the second half. Hayward started the drive with a 12-yard run. Sanders then hit Kelby Blanchette on a 23-yard scoring strike to extend the lead to 35-0.

Sterling (4-5, 2-4) finally got its offense going midway through the third quarter. Reece Sylvester hit Gavin Hebert for a 14-yard touchdown. The two-point run failed to make the score 35-6 with 7:03 left in the third quarter.

After stopping the Titans on downs, the Rangers offense put together another scoring drive. On fourth-and-goal, Sylvester scrambled his way to a 12-yard touchdown to make the score 35-13 with 1:18 left in the third quarter. 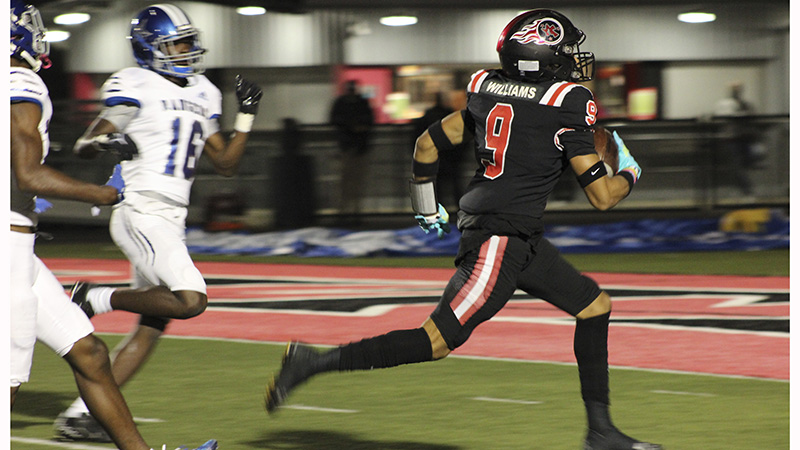 Ilijah Williams runs it in for a touchdown against Baytown Sterling during Friday night’s game. (Jackie Batson/Special to The News)

The Titans answered right back with a quick two-play drive.

Hayward ran for 15 yards on the first play and broke loose for a 45-yard TD run to push the lead to 42-13 with 30 seconds left in the third quarter.

Memorial scored the only points of the fourth quarter.

Sanders hit John Mayon on an 11-yard scoring strike with 8:32 left in the game. The extra point was no good to make the score 48-13.

“Jah’mar threw the ball really well tonight and read the coverage really well,” said Morgan. “He wasn’t forced to run it, which is what we wanted. Kelby (Blanchette) had a really good game.” 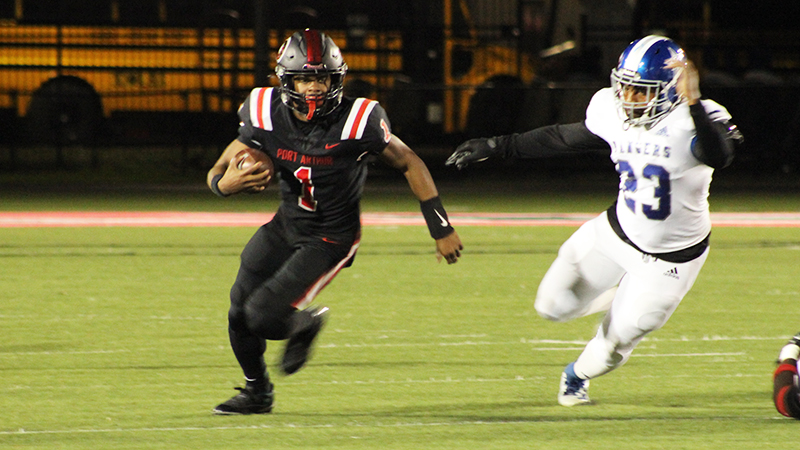 Memorial’s Jah’mar Sanders runs away from a defender. (Jackie Batson/Special to The News)

Sterling won the toss and elected to defer to the second half.

The Rangers tried to surprise the Titans with an on-side kick. Memorial’s Kelby Blanchette caught the ball on the first hop and raced 52 yards for a touchdown to give the Titans a quick 7-0 lead with 11:53 left in the first quarter.

The Rangers fumbled on their next possession, which was recovered by Jhalan Augustine, with the Titans taking over at the Sterling 41. Hayward carried the ball three times, the last of which was for seven yards to the 17. Sanders scored on a 12-yard touchdown run to give the Titans a 14-0 lead with 9:24 remaining in the first quarter.

Memorial’s defense forced a Sterling punt on its next possession. Hayward started the Titans drive with a 17-yard run. Sanders hit Mayon for an 11-yard completion. Sanders connected with Blanchette on a 59-yard scoring strike to push the Titans lead to 21-0 with 4:02 left in the first quarter.

After another three-and-out by the Rangers, Memorial went back to work on another scoring drive. Sanders had runs of 14 and 28 yards. Then Sanders hit Ilijah Williams over the middle for a 23-yard scoring strike to extend the Titans lead to 28-0 with 42 seconds remaining in the first quarter.

Both teams had chances score in the second quarter, but the halftime score remained 28-0. Memorial had the ball down to the Sterling 13 when Hayward fumbled at the 5. The Rangers had first-and-goal at the Memorial 7, but the Titans defense stepped up and forced three straight negative plays and the Rangers turned the ball over on downs.

The Play Of The Game Was…Kelby Blanchette returning the opening kickoff 52 yards for a touchdown. Sterling tried an on-sides kick to start the game, but Blanchette took the ball on the first hop and raced in for the score. The Titans would never trail in the game.

Up Next…Memorial closes out the regular season next Friday with a 7 p.m. game at Friendswood. Baytown Sterling returns home to host Baytown Lee next Friday. Kickoff is set for 7 p.m. at Stallworth Stadium.