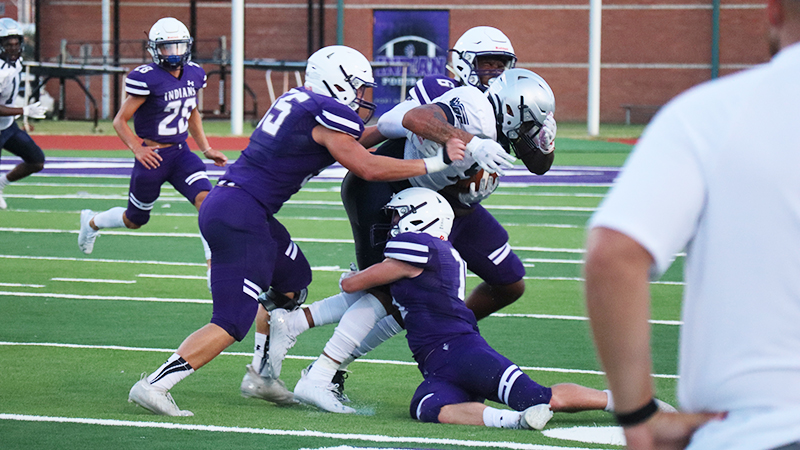 PORT NECHES — The Port Neches-Groves Indians control their own fate with two games left on the regular season schedule.

PNG started the week in a three-way tie with Nederland and Barbers Hill. Because of the point differential in the games played between the teams, Nederland started on the outside looking in and needs to get a game up on either PNG or Barbers Hill.

In the next two games, PNG will play Texas City, who is ranked No. 2 in the district and Santa Fe, who is in last. Barbers Hill plays Dayton and Texas City. Nederland played Thursday night and closes out the season with Crosby.

If the teams with higher win totals win their games (meaning no upsets), PNG will earn the third seed in the playoffs.

PNG could put themselves in a position for the No. 2 seed with a win over Texas City Friday, but it will be a tall task.

The Stingarees feature the district’s top defense, which has held opponents to 180 yards per game. As a point of reference, Nederland has the second-ranked defense, allowing 295 yards per game.

The Stings have the district’s two leading interceptors in Donovin Carraway (6) and Donovin Avery (4). Both have also returned picks for scores.

Faircloth said his team has to get over last week’s blowout loss to Crosby.

“Our message is always to take it one day at a time,” he said. “We have to have great practices. That is the key to playing well on Friday night. We have two big games left and so does everyone else. We have to work every day on ways to get better.”

Faircloth said team health is important for all teams that are feeling dinged up at the end of a long season.

The PNG offense has come along as the season’s end nears. The Indians have the third-ranked unit, averaging just under 400 yards per game.

This will be the final home game for the Indians. Faircloth said that his players have to play great team defense to come away with a win Friday.

“It comes down to playing defense and getting turnovers,” he said. “Those things are going to be really, really important. Offensively, we can’t put our defense in bad spots. We have to move the football, get first downs and win the field position. We have to protect the ball and find a way to get turnovers.”

Turnovers will not come easy for PNG, which ranks near the bottom of the district in the category. The Stings are second in the turnover margin with plus 12.