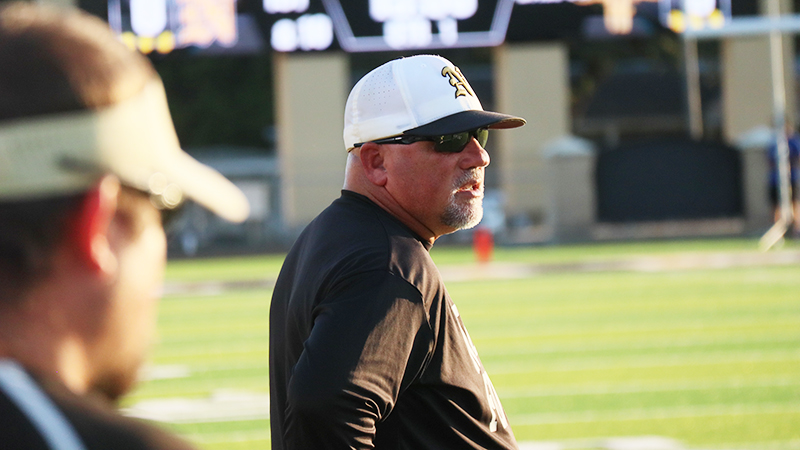 HUMBLE – Turnovers and big plays were Nederland’s downfall as Kingwood Park handed the Bulldogs a 35-22 defeat in District 12-5A action Thursday night at Turner Field.

After taking a lead with less than a minute to go before halftime, the Bulldogs defense let Pierce Richards catch a pass and weave his way for a 67-yard touchdown that gave the Panthers a 19-14 lead. Combined with Nederland’s uncharacteristic four turnovers in the game, it was too much to overcome.

The loss dropped Nederland to 6-3 overall and 3-3 in district play. With district leading Crosby looming in the regular season finale next Friday, the Bulldogs playoff hopes took a hit with the loss. They will need to get help in hoping Port Neches-Groves and Barbers Hill also drop some games down the stretch.

“That was a big play,” Nederland coach Monte Barrow said of the 67-yard touchdown by KP right before halftime. “Things like that change how you approach the start of the second half. How your kids feel going into halftime. You have to give them credit. They made a play, and we didn’t.”

Trailing 19-14, Nederland received the kickoff to start the second half. The Bulldogs had a promising drive going when Kyndon Fuselier was stripped of the ball, which was recovered by KP’s Luke Shoelen. The Bulldogs defense was able to hold and force the Panthers to punt on their ensuing possession.

After forcing the Bulldogs into a three-and-out, KP put together a quick scoring drive thanks to good field position following a 24-yard punt to the KP 36. Cody Floyd scored on a 25-yard run. A failed two-point conversion made the score 25-14 with 4:45 left in the third quarter.

Nederland answered with a scoring drive of its own. The drive started with consecutive completions from Luke Broussard to Preston Deserrano of 14 and 7 yards. Fuselier had a 20-yard run. Broussard capped the drive with a 5-yard run. Fuselier ran in the two-point conversion to make the score 25-22 with 1:51 remaining in the third quarter.

As was the case most of the night, the Panthers had an answer. Sims capped the six-play drive with a 28-yard touchdown pass to Hayden Bender to push the lead to 32-22 on the final play of the third quarter.

A Tony Sterner 35-yard field goal were the only points scored in the fourth quarter to provide the final margin of 35-32.

Kingwood Park (3-6, 2-4) won the coin flip and elected to receive the opening kickoff. After getting one first down, the Nederland defense held firm to force a punt. The ensuing punt may have been partially blocked as it only went nine yards.

The Bulldogs did not squander the good field position at the Panthers 39. The quick drive featured a steady diet of Kyndon Fuselier as he ran four times, the last of which was a 7-yard touchdown to give Nederland a 7-0 lead with 7:37 to go in the first quarter.

Fuselier finished with a game-high 170 yards rushing on 21 carries. His spending time at running back was in the game plan all along, according to coach Barrow.

“We went into the week with the idea putting him in at running back and see how it went,” said Barrow. “We wanted to get the ball in his hands more. To not allow the defenses to shift to him (at wide receiver), like they have been all year. He’s getting double and triple coverage. He made a lot of good things happen tonight.”

KP responded with its first scoring drive. Jaxon Sims hits Pierce Richards for 13 yards on the drive’s first play. Following a 22-yard run by Isaiah Perez, Sims hit Richards for a 23-yard touchdown to tie the game at 7-7 with 5:23 left in the first quarter.

Nederland’s Luke Broussard was intercepted by Luke Shoelen the Bulldogs next possession. The Bulldogs defense once again held firm, stopping the Panthers on fourth-and-1 at the 38. Nederland had a good drive going but turned the ball over on downs at the Panthers 21.

KP had its next drive stall at the 40. However, Nederland was called for a roughing the punter penalty to keep the drive going. Three plays later, Sims hit Richards on a 40-yard touchdown pass. The extra point was no good to make the score Panthers 13, Bulldogs 7 with 5:20 left in the second quarter.

Nederland answered with a lengthy scoring drive that took most of the remaining time off the clock. Broussard and Fuselier alternated running the ball. Then Broussard hit Fuselier for a 13-yard completion to give the Bulldogs first-and-goal at the 10. Following a 9-yard run by Fuselier, Broussard called his own number on a quarterback sneak to put Nederland up 14-13 with :49 left in the first half.

KP wasn’t done yet. The Sims to Richards connection struck again for the Panthers, this time on a 67-yard touchdown pass with :36 left in the half. The two-point conversion run failed, giving the Panthers a 19-14 halftime lead.

THE PLAY OF THE GAME WAS…
Kingwood Park’s Jaxon Sims hit Pierce Richards on a 67-yard touchdown pass with just 36 seconds left in the second quarter to give the Panthers a 19-14 halftime lead. That play happened right after Nederland took a 14-13 lead with 49 second left in the half.

UP NEXT…
Nederland returns home to host district leading Crosby next Friday at 7:30 p.m. in the final regular season game. Kingwood Park hits the road for the regular season finale at Dayton. Kickoff is set for 7:30 p.m.