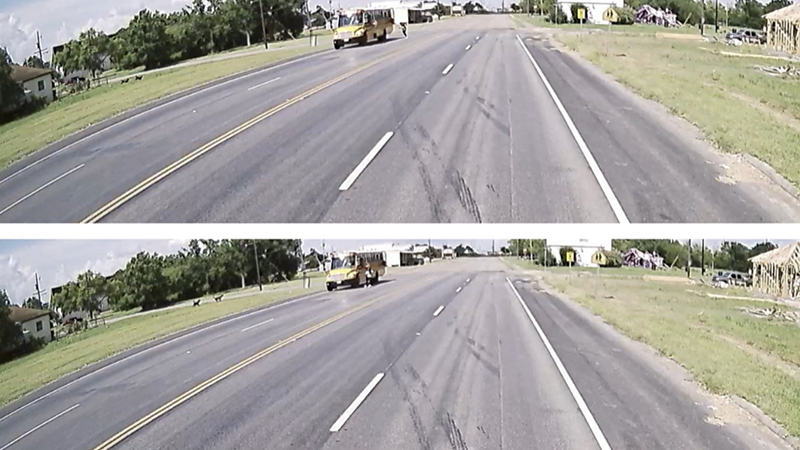 A speaker at an August 2021 Port Arthur City Council meeting showed the following images of a local young student running from a stray dog as soon as exiting a school bus.

Two months after a Port Arthur resident approached council regarding stray dogs when he was forced to stab one, staff said code enforcement is still a priority but Animal Control has more than just dogs on their leash.

Councilman Cal Jones requested an update regarding Animal Control and stray dogs as part of this week’ meeting.

“I don’t know if y’all are working in certain sections of the city, but I know in the Lakeside area, they’re running all over the place,” Jones said. “Down on my end of town, there are 7-10 of them running around every night. People are trying to jog and they’re having trouble…”

It was a jogger that approached the Council initially and spoke about having to stab a stray dog when it attacked him.

Ivan Mitchell also showed pictures of a child getting off of a Port Arthur ISD school bus and running into oncoming traffic as two dogs are seen behind her.

“Thank God there were no vehicles coming by because…she darts directly in the street, not looking anywhere,” he said at the time. “Not her fault; she’s scared.”

At the Sept. 7 meeting, Director of Development Services Pamela Langford informed the council that city ordinances would be reviewed, particularly due to city-related bills passed during the Texas legislative session that referenced dangerous dogs.

On Tuesday, City Manager Ron Burton said the legal department is involved in reviewing all ordinances relating to animals within the city.

However, he stressed, Animal Control handles a great deal with few employees.

“The animal control department has ben very busy in terms of what they do,” he said.

In September, the five animal control officers were charged with a population of 56,000 people and 144.2 square miles of city. They investigated 416 calls, seized 196 animals, coordinated 30 rescues, worked to adopt out strays, returned 10 to owners, collected and disposed of feral hogs in Sabine Pass and assisted the Jefferson County Sheriff’s Department and Port Arthur Police Department with livestock.

“That was only a snapshot for the month of September,” he said.

In order to view the city ordinance regarding stray animals, go to portarthurtx.gov, click on “code of ordinances” on the left side of the page, and select “Chapter 10.”