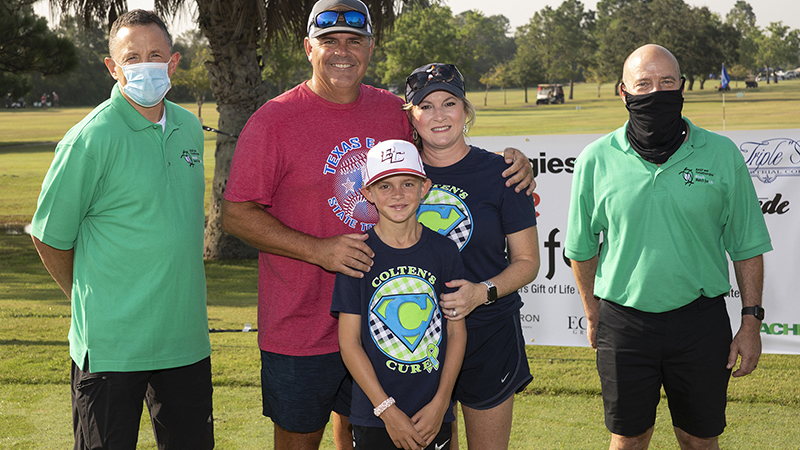 Despite the near-400 people roaming Bayou Din Golf Course earlier this month, the star was Colten Collier. The fifth grade Bridge City Intermediate student and his family attended the annual Miracle Match for Life Golf Tournament, as they have in the past, to greet and thank participants.

It was Be the Match, one of the benefactors of the event, that allowed him to be there. April marked six years since the child had received a life-saving bone marrow transplant.

“It’s so nice,” said Jamie Hogge, coordinator of the event. “They walk around and wave at people and thank them.”

The tournament, sponsored by BASF TotalEnergies Petrochemicals LLC and TotalEnergies, raised $119,000 for Be the Match, LifeShare Blood Center and the Julie Rogers “Gift of Life” Program.

Next year will be the 20th year, and will push total earnings to more than $2 million.

“This golf tournament uniquely is divided amongst these three original recipients, all of whom through their own outreach are saving lives,” said Norma Sampson, Gift of Life executive director. “It’s such a wonderful, collaborative effort that makes a positive impact on so many people.”

And that, Hogge said, was the original intent and the meaning behind the name. The fundraiser was created to help fund those three organizations in particular.

And it’s through community donations such as that, Sampson said, that make it possible for Gift of Life to provide the multitude of services it does in Southeast Texas.

It began in 1994 as a tribute to founder Regina Rogers’ mother, who was a breast cancer survivor. Since, it has grown into a non-profit that provides services to the medically underserved and has diagnosed more than 300 men and women that may otherwise have not found their cancer in a timely manner.

But even if they can’t provide physical healthcare, Sampson said, Gift of Life doesn’t turn anyone away.

“We might not be able to provide the medical coverage, but we can help with the basics that they need and try to integrate them with other non-profits in our community that equally care about this marginalized population,” she said.

Be the Match is a national organization that pairs marrow donors with those in need.

“Bone marrow matches are often very difficult to find,” Hogge said. “They say if you find one, it’s your miracle match.”

And LifeShare Blood Center works in office and through mobile community donation sites to collect blood for local hospitals, which then goes to cancer patients, burn victims and trauma victims, among others.

Hogge said the tournament sells out each year with 72 participating teams — 35 in the morning and 36 in the afternoon. In addition, there are a multitude of food vendors on hand serving everything from fried shrimp to fish tacos.

The tournament is typically held in April but was moved this year due to COVID. Next year it will return in the spring.