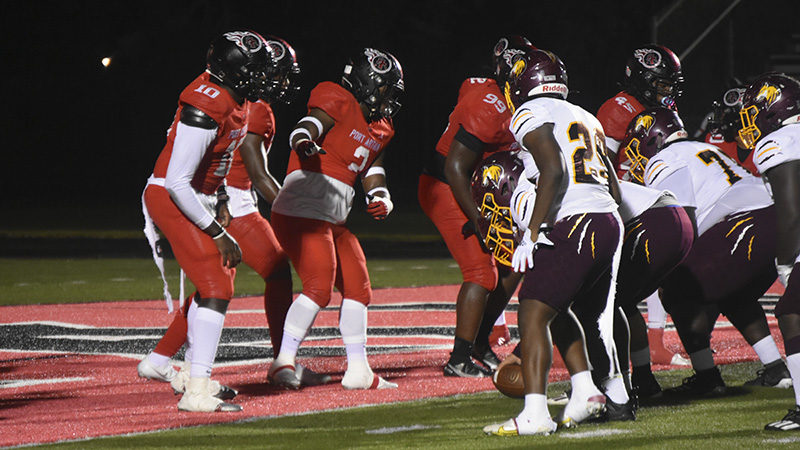 Memorial and Beaumont United lineup against each other mid-way through the first quarter following a weather delay. (Monique Batson/The News)

The one hour and 18 minute weather delay didn’t seem to bother the Titans as Memorial cruised to a 34-9 win over Beaumont United in District 9-5A action Friday night at Memorial Stadium.

Jah’mar Sanders rushed for 112 yards on 14 carries to lead the Titans. He also completed 5 of 10 passes for 73 yards and a touchdown. Adrian Hayward rushed for 56 yards and two touchdowns. Ilijah Williams had three catches for 56 yards.

Leading 13-3, Memorial received the second half kickoff and marched right down the field to extend its lead. Marcus Hayes had a 23-yard kickoff return to set up at the Timberwolves 47. Jah’mar Sanders completed swing passes to Adrian Hayward for 8 and 9 yards.

Sanders converted a fourth-and-two with an eight-yard run. Sanders followed with a 15-yard scoring strike to John Maynor to put the Titans up 20-3 with 9:01 left in the third quarter.

United (1-6, 1-3) put together a drive late in the quarter, which was aided by a roughing-the-passer and person foul penalty against the Titans. Devuan Davenport intercepted the Timberwolves’ Jonathan Martin at the goal line to thwart the drive.

Memorial (6-1, 4-0) responded with a scoring drive. Hayward started the drive with a 10-yard run. Sanders hit Ilijah Williams for 35 yards. Hayward followed with a 5-yard scoring run, his second touchdown of the game. That extended the Titans’ lead to 27-3 with 11:53 left in the fourth quarter.

Ja’quailon Chaney closed out the scoring for the Titans with a 4-yard touchdown run to push Memorial’s lead to 34-3.

United closed out the scoring on Martin’s 46-yard touchdown run with 3:44 left in the game. The Timberwolves’ extra point was blocked to make the score 34-9. Martin rushed for 112 yards on 14 carries and completed 8 of 16 passes for 68 yards.

For the second week in a row, it was the visiting team that took the opening drive and marched down the field for a score. United put together a 13-play drive. Quarterback Jonathan Martin scrambled for 40 yards on third-and-two to the Titans 15.

A Martin 8-yard run gave the Timberwolves first-and-goal at the 1. However, Memorial’s defense would stiffen and hold United out of the end zone. The Timberwolves had to settle on a 23-yard field goal by Aiden Cruz to take a 3-0 lead with 5:36 remaining in the first quarter.

Memorial would answer right back on its opening drive of the game. Sanders converted on fourth-and-three with a 6-yard run. He would also have a 30-yard run on the drive. Adrian Hayward capped the 8-play drive with a 22-yard touchdown run to put the Titans up 7-3 with 2:10 left in the first quarter.

The Titans scored the only points of the second quarter. Both teams turned the ball over on downs early in the quarter. Memorial’s defense forced a quick three-and-out by the Timberwolves mid-way through the second stanza. United’s punt may have been partially blocked or it was just a high, short kick that bounced straight backwards when it landed and resulted in a punt for zero yards.

Memorial took advantage of the good field position at the United 35. It took the Titans just three plays to punch it in the end zone. Sanders hit Ilijah Williams for 16-yards. Sanders called his own number on an 18-yard touchdown scamper. The extra point was no good to make the score 13-3, which is how the teams went into the locker room at halftime.

Adrian Hayward’s 22-yard touchdown run with 5:36 left in the first quarter. That run put the Titans up 7-3 and they would not trail the rest of the game.

Memorial hits the road next week for a Thursday game at Baytown Lee. Kickoff is set for 7 p.m. Beaumont United hosts LaPorte next Friday at 7 p.m.