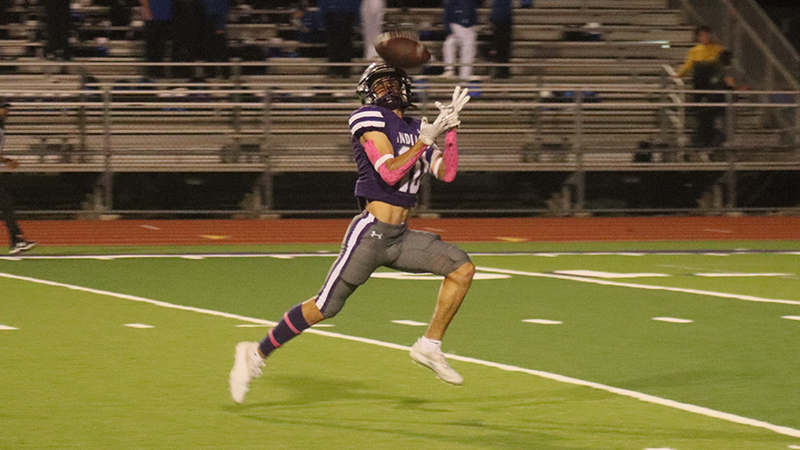 PORT NECHES — The Port Neches-Groves Indians took back control of their playoff hopes with a 49-35 win over Barbers Hill last week.

After practice Wednesday, PNG Head Coach Brandon Faircloth told his team to expect desperation from Kingwood Park, who will likely see any hopes of the playoffs vanish with a loss this evening.

The Panthers’ only win of the season came in Week 1 in a 35-20 contest against Sam Houston. Since, Kingwood Park has allowed at least 40 points in each of its games with their last one being a 67-13 loss to Crosby.

“Our preparation is the same,” Faircloth said. “We worked all week long to prepare for Kingwood Park. We don’t change the schedule. They have a great staff and are really well coached. I think the results are a little deceiving. I think they have a realty good team.”

Faircloth said football is a game where any team can win on any given day.

The head coach said PNG will have to be at their best.

“They have a great team and great players,” he said. “We are going to have to play with great effort and be tough. Everyone plays hard. Every game is a battle and a tough test. It is not getting any easier for us this Friday.”

PNG enters the game with the district’s fourth-ranked offense and defense.

The PNG offense put together its most impressive performance against Barbers Hill, amassing 576 yards, led by quarterback Cole Crippen, who threw for 336 yards and four TDs, and running back Koby Trahan, who ran for 235 yards and three scores. Receiver Landon Guarnere hauled in six passes for 129 yards and three TDs.

Crippen said he and his teammates have to stay level headed to avoid an upset of their own.

“We have to put it on the playoff basis,” he said. “We know what we have to do to make the playoffs.”

PNG sits in the fourth spot behind Nederland, Crosby and Texas City with games against the Cougars and Stings still on the schedule.

Kickoff is slated for 7 p.m. today at Turner Stadium.