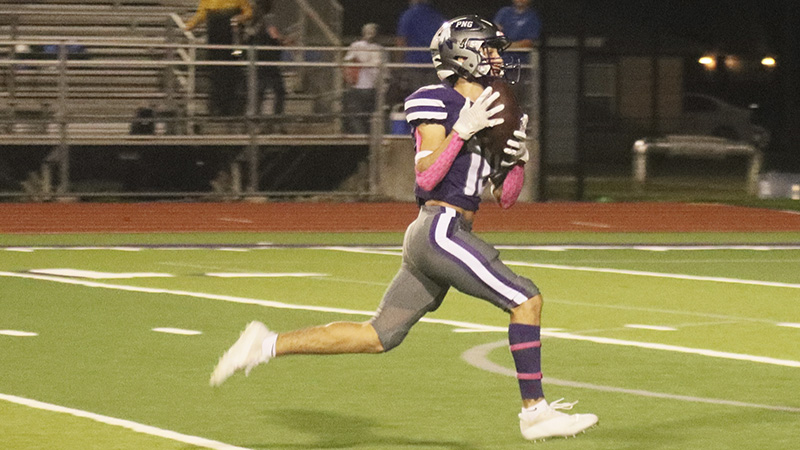 The Indians are hosting Crosby at 7:30 p.m. next Friday. (File photo)

HUMBLE — Koby Trahan rushed for 385 yards and three touchdowns as the Port Neches-Groves Indians overcame a sluggish start to defeat the host Kingwood Park Panthers 56-40 in a 5A-2 Region III District 12 game at Turner Stadium on Friday night.

Trahan scored on runs of 3, 31 and 74 yards on the evening as the Indians (5-2 overall, 3-1 district) rallied from a 17-0 first-quarter deficit to run their winning streak to three games and ruin Kingwood Park’s homecoming festivities.

Kingwood Park controlled the first quarter, building a 17-0 lead before PNG roared back in the second quarter with 28 straight points.

The host Panthers took an early 3-0 lead on a 6-yard field goal by Tony Sterner. Diego Davis picked off a Cole Crippen pass and raced 60 yards to the end zone to make it 10-0 before the game was six minutes old.

Kingwood Park increased its lead to 17-0 with 2:16 remaining in the opening quarter on a 40-yard pass from Jaxon Sims to Brady Jones.

When the quarter changed, the magnetic pull of the north end zone of Turner Stadium maintained its pull as the Indians scored four touchdowns in the period. Trahan scored PNG’s first two TDs on runs of 3 and 31 yards, respectively. Sebastian Agudelo scored on a 2-yard run before Cooper Faircloth hauled in a 19-yard scoring pass from Crippen to make it 28-17.

Sterner added a 47-yard field goal for Kingwood Park in the dying seconds of the half to make it 28-20 at intermission.

The Indians scored the only points of the third quarter on touchdown receptions by Brock Hebert and Chance Prosperie.

Hebert’s TD came out of the PNG bag of tricks as wide receiver Landon Guarnere threw the scoring aerial. The teams combined for five touchdowns in the final period, with Trahan scoring PNG’s final TD on a 74-yard run up the middle through an exhausted Kingwood Park defense.

Game ball goes to … In a unanimous decision, Trahan gets the game ball thanks to 370 rushing yards.