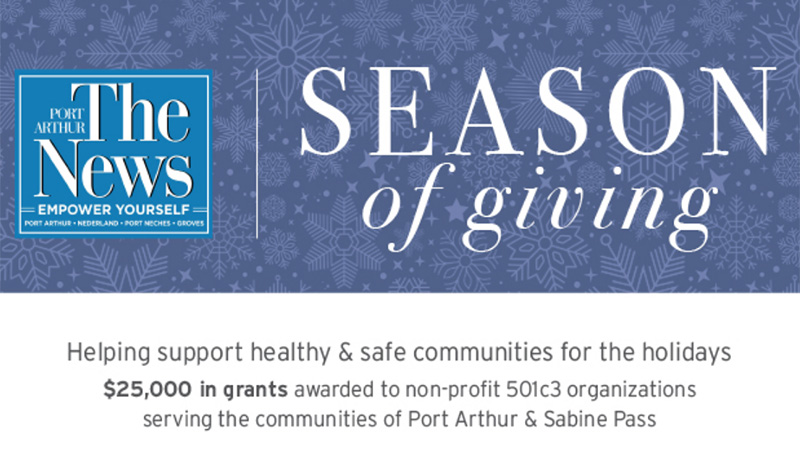 Last week, Port Arthur Newsmedia announced The Port Arthur News Season of Giving powered by Port Arthur LNG. With this exciting unveiling came the news that 501(c)3 non-profits in Port Arthur and Sabine Pass are eligible to apply for grants ranging between $1,000 to $5,000 with a total of $25,000 to be given.

The easy-to-use application is available now at panews.com/season-of-giving.

The application process is open through October, with awardees to be notified by Nov. 12.

But who decides where the money goes? It’s time to introduce you to the five community members that will make up the judging panel.

In this first article, you’ll meet four of the five.

How Tracy Ramirez has time to juggle everything on her plate is, in itself, a wonder. At just 29, she is a mother of four who works at the Jefferson County Courthouse and attends Lamar University, where she intends to major in broadcast journalism with a minor in businesses. She also writes on occasion for Port Arthur Newsmedia, where she serves as a features writer and integral liaison between the publication and Spanish-speaking community members.

But that’s just a part of her day.

“I wanted to be involved in this project because I believe it’s important to give back,” she said. “I am very honored to do so.”

Tim Duriso is not one to rest. The Port Arthur Police Chief has been leading the department since he was appointed in 2018, but he’s been serving it for much longer.

His work for the residents of Port Arthur stretches far beyond the police department. Duriso is an active supporter of the Julie Rogers Gift of Life program, and has been seen in a pink wig and tutu to raise awareness for breast cancer. He’s also been an active member of several local service groups, and was on hand in March when 100 Black Men of Greater Beaumont and members of the Port Arthur Rotary surprised shoppers by handing out $50 gift cards at the H-E-B on Gulfway Drive.

“I have always worked in the community and believe in order to make a difference, you have to be a participant,” he said. “This program allows me an opportunity to continue serving the great citizens of Port Arthur, Sabine Pass and surrounding areas. I would like to thank The Port Arthur News for considering me as one of the panelists.”

Just speaking with Raquel Ochoa, it’s hard to understand how the 31-year-old mother of four has time to accomplish half of what she has. But when it comes to community involvement, she’s all but written a book.

Raquel co-owns Golden Port Construction LLC with her husband, Oscar. The business focuses on residential and commercial remodeling, new construction and repairs, just to name a few. And it’s with the help of their four daughters that the couple has made their investment a success.

“My kids do a lot to help,” she said. “We just all work as a family. I don’t know how I do it, but every day is a challenge for sure.”

Owning a business and parenting four kids is plenty for anyone. But Raquel is also a proud member of the Greater Port Arthur Chamber of Commerce, Vice President of the Hispanic Business Council, on the Board of Directors for Jefferson County Lontgerm Recovery Group (which assists those in the area with disaster-related needs), a member of the Chamber’s Young Emerging Leaders, and serves on the Community Advisory Committee for Port Arthur LNG.

“I like to be involved,” she said. “I love to give back to my community.”

Raquel has always believed in the power of helping others, whether it be through business advice or support with their families.

“I feel being involved in your community and giving back is important,” she said, “and I believe if everyone would do the same, our community would be a better place.”

When it comes to community involvement, Dr. Johnny Brown actually has written a book. In fact, the long-time educator recently published his second in a series called “The Emerson Street Story 2: Winners Always Practice Program.” His wife of 46 years, Carolyn J. Brown, has also written a book titled “Life on the Land: Memoir of a Farmer’s Daughter.” But together, the two are known locally for well more than just their writing skills.

Johnny attended public schools in Austin, achieved his bachelor’s and master’s degrees at Texas State University, and earned his doctorate at University of Texas at Austin. From there, he was a teacher, coach, campus school administrator, and later a deputy superintendent and superintendent throughout four states.

One of those being Texas, where he was the superintendent of Port Arthur ISD for seven years before retiring. Although even in retirement, he’s yet to hit the brakes.

He’s currently a part-time adjunct professor/field supervisor at Lamar University, where he works in the superintendent certification program.

But it’s in service where his true work lives.

“I love helping others and that’s been the mission of my life from the start,” Johnny said. “I am honored and appreciate the opportunity to participate in (The Season of Giving). It allows me to continue the mission that has been my direction for as long as I can remember — to reach out and help somebody.”

Johnny said it was something his mother told her children every day, and something he’ll never let go of. ”

“For every day that you live, do you very best to help people,” he said. “This project enables me to actively accomplish that mission.”

Outside of his work in education, Johnny and Carolyn are active members of the Port Arthur Rotary Club, where Johnny is the immediate past president. He is also the second vice president of the 100 Black Men of Greater Beaumont. Both, he said, are service organizations aimed at improving the community.

“Even in the publication of the two books,” he said, “a large focus is to acknowledge the challenges we face in the community and the world, and to make suggestions on how we can help the common good beyond self.”

Who is the 5th member, you ask? Just click here to find out.