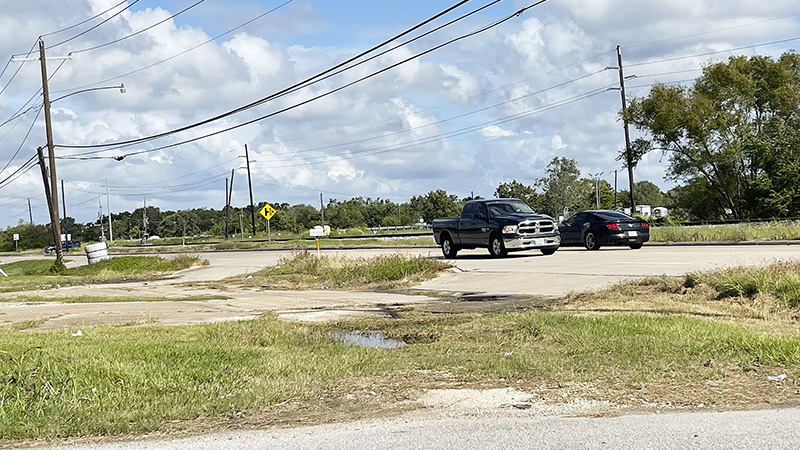 A plot of land on West Port Arthur Road may soon become a company that sells and rents large equipment. However, the amount of traffic on the access road came into question during a public hearing this week. (Monique Batson/The News)

A public hearing Tuesday regarding the rezoning of property on West Port Arthur Road did not draw opposition from residents, but it did bring questions from one councilmember regarding safety.

The hearing — the second of two — was held during the city’s regular council meeting to allow comments regarding the rezoning of property between 65th and 66th streets from Light Commercial to Planned Development District 41.

“An application was filed with the Planning and Zoning Commission on July 29 requesting a zoning change,” said Assistant City Manager Pamela Langford. “The commission held a public hearing on Aug. 23 over Zoom and a vote of 4-0 was made recommending approval of this request.”

The request comes from St. Christopher Council 3195, which is looking to sell the property to a company that sells and rents heavy equipment tools “that would serve various industries throughout the area,” Langford said.

The name of the company was not given during the meeting.

Langford said prior to Tuesday, 19 public notices had been mailed to residents within a 200-mile radius of the proposed size. While the Planning and Zoning Commission did receive one letter in opposition, no one from the public spoke on the issue Tuesday.

The one matter of concern came from Councilman Kenneth Marks, who first asked if a site plan had been submitted.

Langford said no, as the current owners are in the process of selling the property; however, the new owners would be required to submit a site plan after purchase.

“What will be the access and egress for that property?” Marks asked. “I know that’s going to come with the site plan, but we know that West Port Arthur Road is part of that plan. We have a lot of traffic on there in and out of the city — mornings and evenings. We know the speed limit is 40 miles per hour on that stretch of road. And I just want to make sure whatever site plan we have, that they’re going to be egressing or exiting on the back side and not out onto West Port Arthur Road for safety purposes.”

Langford said the Public Works Department can take that into consideration, and can also request a traffic study for any kind of development that would go in that location.