What does the new ‘Film Friendly City’ designation for Port Arthur mean? 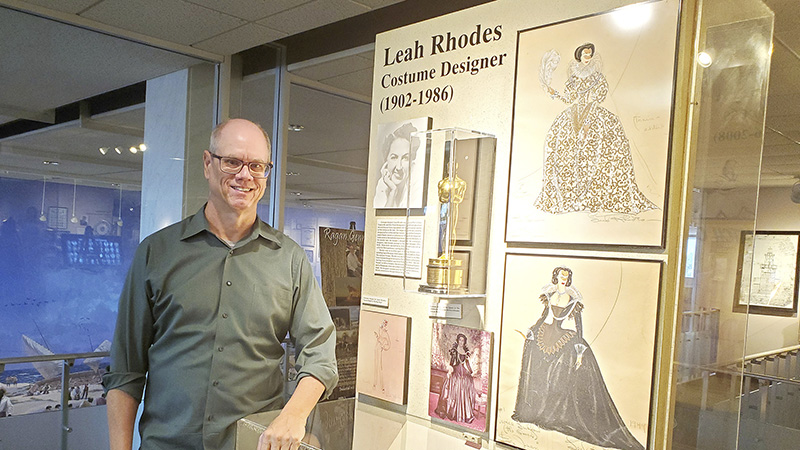 Robert Fong, curator at the Museum of the Gulf Coast, stands next to an original Oscar, which was presented to Port Arthur native and Hollywood costumer Leah Rhodes for Best Color Costume Design for her work in The Adventures of Don Juan. (Mary Meaux/The News)

Port Arthur is officially ready to be in the spotlight as the site of movies, television, commercials and more.

Gov. Greg Abbott announced this week that the City of Port Arthur, having completed the multi-step training and certification process, has been designated as a Film Friendly Texas community by the Texas Film Commission.

Robert Fong, curator at the Museum of the Gulf Coast, said the designation puts Port Arthur in the conversation.

But there’s so much to offer in the city.

Port Arthur doesn’t look like other areas in the state.

“We have swampy areas. We have alligators. We have Cajun bands,” he said. “What we want people to do, if they made a deal with the State of Texas and they’re shooting in Texas, they don’t need to go to Louisiana to shoot. We have the historical homes. We have the Pompeian Villa. We have the Vuylsteke house. Rose Hill’s being renovated and it will be available soon.

“We have these ships that go by, it’s just a different look. You have Pleasure Island. You have Sea Rim.”

Should a film be shot in the city that would mean hotel rooms for the crew, renting of historic homes, people in local restaurants, using transportation and shopping.

“This community will open its arms,” Fong said. “It’ll try to help anybody that comes here that wants to make a film and work with you.”

Mayor Thurman Bartie said he is glad to hear the news, saying it may positively impact the economy.

Pat Avery, president and CEO of the Greater Port Arthur Chamber of Commerce, knows the potential for positives.

An Atlanta, Georgia native, Avery said the city has been competing with Hollywood for film making for years.

“We welcome the film industry here,” Avery said. “We have so much talent in our city and in the Golden Triangle, it’s a perfect place to tell all kinds of stories especially Texas stories.”

Tammy Coleman, a Port Arthur native living in he panhandle area of Texas, remembers when Leap of Faith was filmed locally with Steve Martin and Debra Winger.

“It did some good,” Coleman said. “But having your town actually designated as a film town would be even more to do.”

Darragh Castillo with the Port Arthur Convention and Visitors Bureau said the Bureau has been working for the city to receive the designation and encourage filming.

“We have great coastal views, outdoor venues, personality and hospitality. We want Port Arthur to join other Texas cities in a database filmmakers view for sets and accessibility,” Castillo said.

The city already has “sliver screen history,” she said.

“The Museum of the Gulf Coast shares the stories of movies, actors, writers, musicians and filmmakers with links to movies and productions,” she said. “Museum representatives helped the Port Arthur Convention & Visitors Bureau with this project by uploading area site scenes of historical homes, etc. that could be used in filming.”

Port Arthur is one of more than 160 other Texas communities that have received the designation.