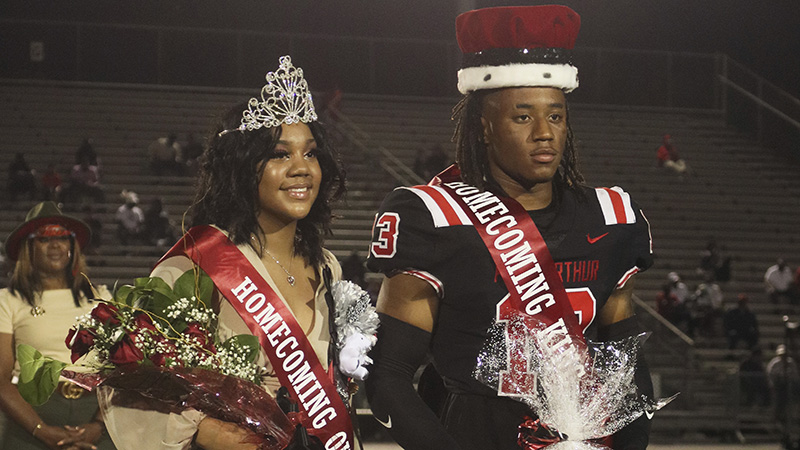 Friday night, it was his legs that carried the Titans to a 44-7 win over Galveston Ball in District 9-5A Division I action at Memorial Stadium.

“Obviously Jah’mar had a really good game, and I thought the defense, after their first drive, really kind of stepped up and made some adjustments to what they were doing and ran to the ball really well,” said Memorial coach Brian Morgan.

Sanders rushed for a game-high 253 yards on 13 carries and three touchdowns. He also completed 9 of 13 passes for 95 yards and another touchdown.

“He’s special. Life after him is going to be tough,” said Morgan when asked about Sanders. “He’s a great kid. He performs every week like that. He’s fun to watch.”

Leading 30-7 to start the second half, Memorial (5-1, 3-0 in District 9-5A Division I) stopped Ball on its opening possession of the third quarter to force a punt. 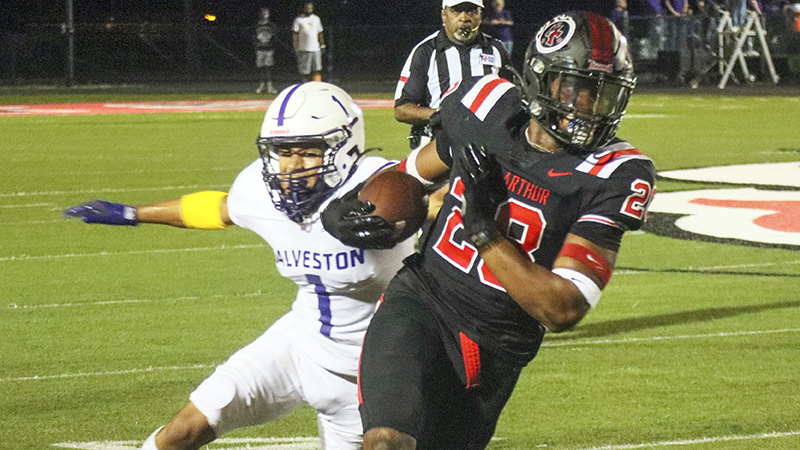 John Maynor returned the punt 64 yards to the Tornadoes 2. Ja’quailon Chaney scored on a 2-yard run. Christian Thomas ran in the 2-point conversion to put Memorial up 38-7 with 10:23 left in the third quarter.

The Titans’ Alex Prevost recovered a fumble at midfield to set up Memorial’s next scoring drive. Adrian Hayward rushed for 15 yards and then Sanders hit Ilijah Williams on a 27-yard scoring strike. The 2-ponit conversion run failed, making the score 44-7 with 2:08 left in the third quarter.

“I thought Galveston Ball came out with a really good game plan. They stressed us in some coverages,” said Morgan about the Titans defense giving up its first points after two straight shutouts. “After that the kids adjusted to it. Defensive coordinator coach (Korey) Mangum made some adjustments and the kids responded. We never really talked too much about holding the other team to zero, we just go out and play.”

Memorial took the opening kickoff and drove down the field to put the game’s first points on the board. Sanders capped the 12-play drive with a 40-yard touchdown run. He kept the drive alive with a 19-yard run on third-and-seven. The two-point conversion failed to make the score 6-0.

Ball (2-4, 1-2) answered right back with a scoring drive of its own. It was a precision passing game to start for the Tornadoes. Seth Williams completed his first five passes. His first pass went for 12-yards to Chad Walker. Williams kept it himself for nine yards on third-and-six.

A personal foul penalty on the Titans pushed the ball to the 13. Williams hit Joseph Cianfrini for 11 yards to the Memorial 2. Joseph Alexander scored on a 2-yard run to put the Tornadoes up 7-6 with 2:59 left in the first quarter.

That was the first points the Titans defense had allowed in eight quarters.

The two teams exchanged interceptions on their next possessions. Jayce Robertson had the interception for the Titans, which set up another scoring drive.

Sanders had consecutive runs of 24 and 8 yards to the Ball 40. Adrian Hayward scored on the next play for a 40-yard touchdown run. Sanders hit Marcus Hayes for the 2-point conversion to put the Titans up 14-7 with 9:16 remaining in the second quarter.

Memorial kept up the pressure. After the defense forced the Tornadoes into the first punt of the game, it took just two plays for the Titans to extend their lead. Sanders weaved his way through the Ball defense for a 78-yard TD run.

Chaney ran in the 2-point conversion to put the Titans up 22-7 with 6:52 left in the second quarter.

The Titans defense forced another Ball punt. The offense put together another scoring drive. Sanders again proved too elusive for the Tornadoes defense. This time he scored on a 56-yard run. Hayward ran in the 2-point conversion to extend Memorial’s lead to 30-7 with 1:51. That’s how the two teams went into the locker room at halftime.

Jah’mar Sanders accounted for four total touchdowns. He rushed for 253 yards on 13 carries and three scores and passed for another 95 yards and a touchdown.

Galveston Ball quarterback Seth Williams completed 10 of 15 passes for 73 yards. Joseph Alexander rushed 31 yards on 11 carries and one touchdown. The Tornadoes were held to 168 yards of total offense.

Jah’mar Sanders’ 78-yard touchdown run that put the Titans up 22-7. It was not a designed run, but Sanders made something out of nothing, making countless Tornadoes defenders look silly trying to tackle him on his way to the end zone. Just another highlight reel run for the senior that displayed his elusiveness and acceleration.