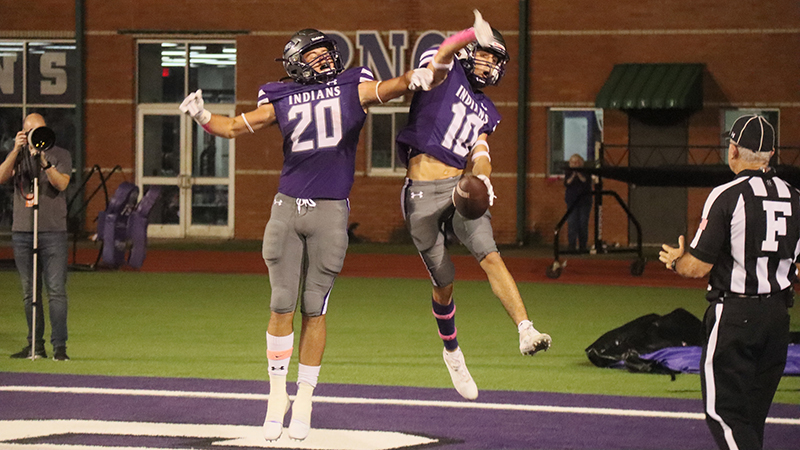 PORT NECHES — The Port Neches-Groves Indians and Barbers Hills Eagles scored early and often Friday night, but when the rubber pellets settled at the end of the night, the Indians came out on top with a 49-35 victory in a district contest at The Reservation.

PNG (4-2 overall, 2-1 district) was led by running back Koby Trahan, who rushed for 235 yards and three touchdowns. PNG quarterback Cole Crippen threw for 336 yards and four TDs, as Landon Guarnere hauled in six passes for 129 yards and three TDs.

The first quarter was an offensive showcase as both teams scored on each of their first two possessions. The Indians took a quick 7-0 lead just three plays into the contest as Koby Trahan raced 71 yards right through the heart of the Barbers Hill (2-4, 1-2) defense.

The Eagles responded 10 seconds later on their first play from scrimmage as Brent Holdren threw a 69-yard scoring strike to Josiah Hendon. Barbers Hill failed on the two-point conversion, leaving PNG with a 7-6 lead just 61 seconds into the contest.

PNG boosted its lead to 14-6 on the next possession, capping the drive on a 14-yard TD pass from Cole Crippen to Landon Guarnere.

The Eagles responded less than two minutes later on a 35-yard TD run by Herndon, who tied the game at 14-14 when he caught the two-point conversion pass from Holdren.

Both teams failed to add to their point totals on the next few possessions before the Indians took a 21-14 lead with 2:21 remaining in the second quarter on a 5-yard run by Trahan.

The Eagles capitalized on a muffed punt return late in the quarter and cut the Indians’ lead to 21-20 on Herndon’s third TD of the half, this one a 15-yard pass from Holdren with 11 seconds left in the half.

The PAT kick failed, leaving PNG clinging to a 21-20 lead heading into halftime.

The second half was another offensive showcase, as the two teams found the end zone a combined seven times.

Barbers Hill never had the lead, but never let the Indians pull away until Crippen found Chance Prosperie with a 27-yard TD pass with 5:07 remaining in the fourth quarter.

We’re going to break the budget as we award game balls to Crippen, Prosperie, Trahan and the scoreboard operator. Barbers Hill wide receiver Josiah Herndon, who scored four TDs for the Eagles, also gets a game ball.

PNG piled up 576 yards of offense on the evening. Barbers Hill piled up 632 yards in a losing effort.

The Play Of The Game …

There are so many to choose from, but let’s go with Trahan’s 99-yard touchdown run after the Indians stopped Barbers Hill at the 1-yard line that gave the Indians a 35-20 lead with 5:33 remaining in the third quarter.

The Indians are at Kingwood Park at 7 p.m. Friday for a district clash with the Panthers. Barbers Hill entertains Santa Fe at 7:30 p.m. Friday.