Nederland boy’s fight with MIS-C is far from over 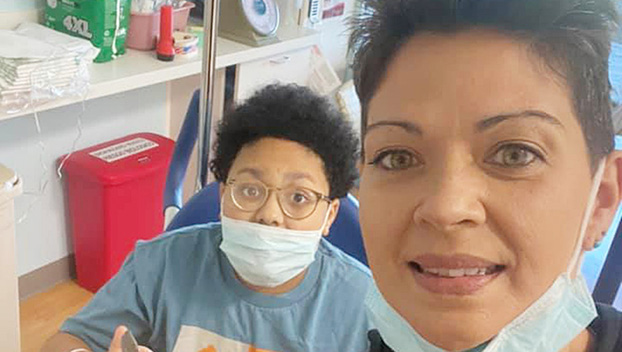 Dre’den Lowe and Missy Lowe are seen at the hospital after Dre's coma.

NEDERLAND — Dre’den Lowe returned to his home this week after 11 days in a coma, but the road to recovery for the Nederland 12-year-old is only just beginning.

“People keep saying, ‘he was sent home, praise God,’” mother Missy Lowe said. “The bottom line is my baby can’t even walk right now. He is pooping on himself and having me move him from one chair to another. For three nights he couldn’t sleep because he was afraid he was going to get tubed again.”

Missy and Jamaal Lowe’s short-term goals for their son are getting him walking and strong enough to shower without assistance.

“We want to help him,” Missy said. “He hasn’t eaten and hasn’t slept at all. We just want to get him over the traumatizing part.”

Dre woke up his mom at 3 a.m. Sept. 22. He had turned blue and feared he was going to die. It was the culmination of four days of unrelenting fever.

He was rushed to a Beaumont hospital, where doctors determined dangerously low blood pressure and an inflamed appendix meant an appendectomy was needed.

When Dre’s health did not improve following the removal of his appendix, he was rushed to Texas Children’s Hospital.

By now it was Sept. 24 and doctors had diagnosed Dre with multisystem inflammatory syndrome (MIS-C).

He was put into a medically induced comma and fed a battery of heavy medicine.

His vitals improved slowly over the next week and a half, leading to Dre sitting up and allowing his mom the first chance to speak with him in almost two weeks.

According to Texas Children’s Hospital, MIS-C strikes a very small percentage of children, on average, four weeks after an acute COVID infection.

MIS-C can impact any organ system in the body and typically strikes the heart, lungs, and skin while also potentially impacting the gastrointestinal track and even the brain.

The connection to COVID has always puzzled Missy, who said Dre was vaccinated and never showed signs of the virus prior to his serious bout with MIS-C.

Officials with Texas Children’s Hospital stress some children could be asymptomatic, thus setting the stage for MIS-C without their loved one ever knowing the threat is possible.

Port Arthur Newsmedia first posted a story about Dre’s battle with MIS-C to panews.com on Sept. 27.

Metrics showed it as the most read story on the site that week, and it was followed up on by numerous local television reports.

The story eventually reached the national level, according to Missy.

“I had the whole 60 Minutes team (at Texas Children’s Hospital),” Missy said. “They did three days of shooting. We had to sign tons of waivers to get them to let them come in. When I wouldn’t push the vax, they pulled the story.”

Missy said she is not here to promote or discourage use of the various COVID vaccinations, but added she has felt pressure to publicly endorse the vaccine.

“I wanted other parents to watch their kids,” she said. “I wanted everybody to make their own decisions. When I kept saying (my son’s MIS-C) wasn’t from COVID, they didn’t like that.

“I am not one to say, ‘don’t get your kid vaccinated.’ It’s your decision. I want people and parents to understand that it doesn’t always affect the child the same way.”

60 Minutes and CBS did not respond to numerous Port Arthur Newsmedia requests for comment.

Dr. Amy Arrington, who has a PhD in viruses, serves as the medical director of the special isolation unit on the Texas Children’s Hospital west campus. She said the impacts of MIS-C first hit the radar of medical professionals in the summer of 2020.

She said in rare cases, COVID impacts a patient and then leaves, setting a “smoldering fire” that burns for a few weeks and then kind of explodes.

“Then your whole body is just over-enflamed due to your own immune response to the virus itself,” Arrington said for those struck with MIS-C. “It is important to know that the first COVID infection can be asymptomatic. A proportion of MIS-C kids never even knew they were infected with COVID.”

She said impacted children normally develop a fever that lasts a few days with routine spikes of 102 or 103. They also have other symptoms of inflammation, including bad stomach pain, diarrhea and vomiting.

A lot of children present a skin rash, and it can impact neurologic systems like hallucinations, confusion, difficulty staying awake and having normal conversations.

“Those are symptoms where you need quick care,” Arrington said. “You need to call your personal care physician to discuss that or go to the emergency room and have an evaluation for MIS-C.”

Unfortunately, there is no way to prevent MIS-C once the trap has been set following a COVID infection, medical officials believe.

Parents of children impacted by the virus are asked to stay vigilant following COVID’s pass.

Although very rare in occurrence, the only way to avoid the onset of MIS-C, according to Arrington, if never contracting COVID in the first place.