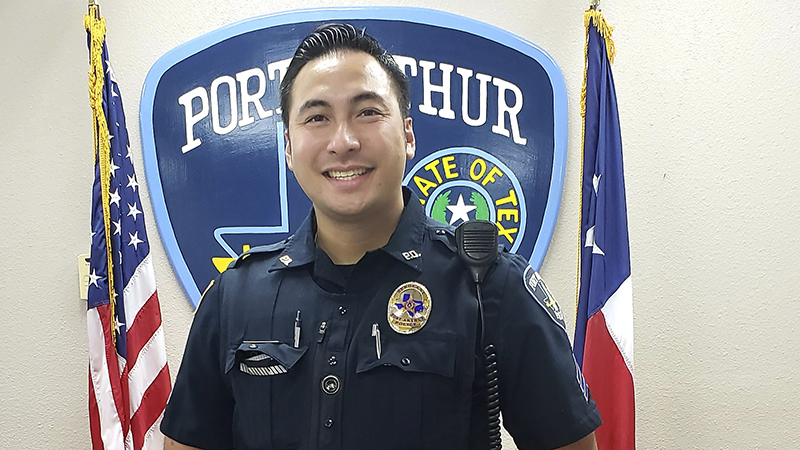 Launching into a career — a dangerous one at that — to make a difference in the community is a common thread between recently promoted sergeants Terry Tran and Shelby Harper.

“I feel like being a police officer, I’m able to make a difference, at least in the community,” said Sgt. Terry Tran, who has been an officer for eight years.

He enjoys working in schools and interacting with students on a one-on-one basis and talking to the community and different cultures.

Tran works with all cultures and enjoys interacting with the community, thus showing a different side of police work.

There are many roles to being a police officer, he said, from helping an older person cross the street to visiting schools and interacting with community members.

“We’re not always out there chasing bad guys,” he said. “That’s also another version of a police officer; we want the community to come to us, to talk to us about their problems and we’ll do our best to help them. People are not going to call a police officer because they’re having a good time. They call when they’re at the lowest point in their lives.”

But that interaction may help a person and maybe prevent a suicide. 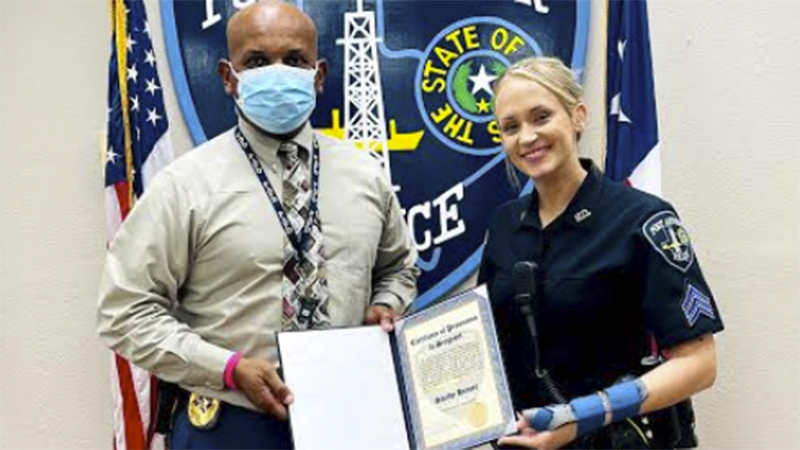 Sgt. Shelby Harper has been with the department almost eight years and she too enjoys meeting people from all walks of life.

Harper explained there is no “typical” day for a police officer.

“It’s never the same and that’s another reason I like being an officer. You never know what kind of day you’ll get,” she said.

Harper was born and raised in Port Arthur, attended Franklin Elementary School and grew up in the Port Acres area. She is a graduate of Sabine Pass School.

While Tran has a family member who is in law enforcement, Harper doesn’t. The closest was a grandfather who was a military police officer in the Army, she said.

To honor this, Harper has a patriotic tattoo with part of a Bible verse “under His wings you will find refuge” along with the year she graduated from police academy and the year her grandfather graduated MP academy.

Harper plans to further her career in law enforcement.

“We’ve only had one female lieutenant in the history of the police department,” she said.

Tran calls police work “energetic,” saying he likes when officers integrate themselves into the community.

“I work at Lincoln (Middle School), Memorial High School and Bob Hope School and most of the kids, now they’re 20, 21, know me from back then,” he said. “I took my time to talk to troubled kids one on one. I kneel down, I ask what’s wrong, what’s going on, is everything ok? They would tell me stuff they wouldn’t tell their teachers. They have a whole life outside of school, and we don’t know why that kid’s acting out — and you get ‘mom’s always gone’ or ‘dad’s not in the house.’”

For some children, seeing a police officer may be painful because the only interactions they may have had was to see a parent taken away.

Tran related a recent interaction he had where he was riding around a townhouse and there were children on bikes.

“They took off when they saw me,” he said. “That is disheartening, you know? I want them to come to me, to talk to me, to interact.”

Like Harper, Tran hopes to advance his career in law enforcement.

“My aspiration is always to rise up and advance my career,” he said. “I do enjoy being in patrol. Just the mere fact you are able to interact with the community and also to be out there with the guys to help out on the front lines.”

In his off time Tran enjoys video games and traveling, he said. But work is his focus.

“I’m excited every day to come to work and do the best I can and to protect the community and the ones I love,” he said.

Police Chief Tim Duriso said he is proud of both new sergeants, adding they represent the department well.

“They’re community oriented, they go out and mix with the public and whenever we call and the police department needs assistance, they show up, no questions,” Duriso said. “They’re still new as far as leaders but I’m looking for some really awesome things from them because of what they’ve displayed in the past as officers.”

Harper and Tran aren’t the only ones recently promoted. Duriso has been promoting others and moving some to other areas within the department.