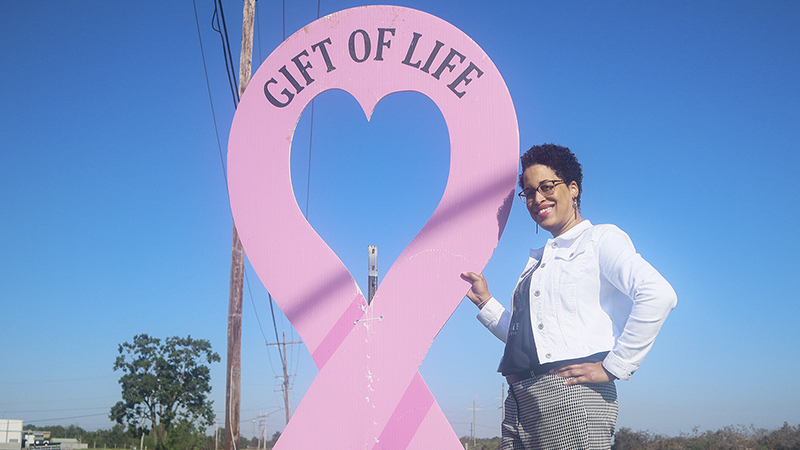 Adrienne Lott had always been extremely cautious when it came to anything involving breast cancer.

Lott, who is the communications specialist for Port Arthur Independent School District, said both of her grandmothers passed away from inflammatory breast cancer.

Because of the family history, Lott was taught early on to be vigilant and self-exam at an early age.

In 2007 at age 33, Lott felt a small lump and brought it up to her physician, who referred her to MD Anderson after test results came back inconclusive.

The diagnosis came back as Stage 0 ductal carcinoma in situ, which is precancerous cells in the milk ducts of the breast. 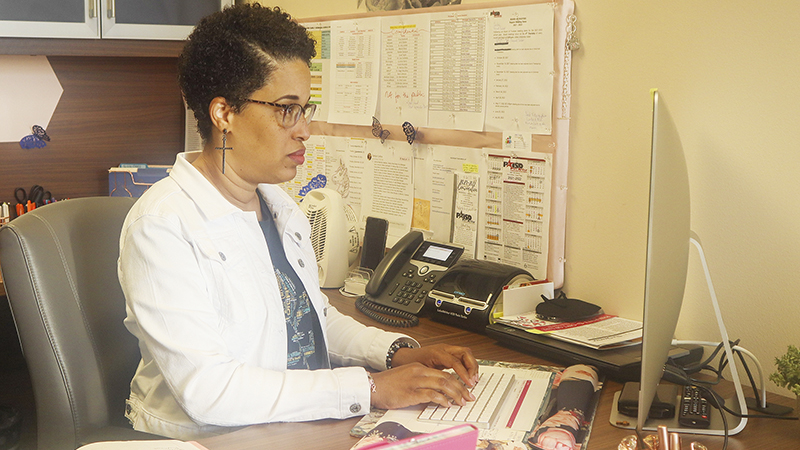 Her team at MD Anderson gave her multiple options for treatment, ranging from removing only the lump to removing both breasts entirely. Despite testing negative for the genes that cause breast cancer, Lott elected the more aggressive route of removing both of her breasts.

“At the time, there were only two or three genes that they tested for that cause breast cancer,” she said. “In my mind, if I just take it all out now, I will never have to deal with it ever again in life. That was my thought process. I didn’t understand at that time that there was a possibility that the cancer could come back. The doctors can take out all that they can see, but there is always a chance that there are cells left over that can metastasize.”

Her doctor said she had a less-than-three-percent chance of the cancer returning.

“I thought I was safe, but there is no safe when it comes to cancer,” Lott said.

In 2017, a decade after her initial diagnoses, Lott had an appointment at her OBGYN for an unrelated health issue.

“She noticed that I had a growth under my skin, because I had gotten breast implants after my double mastectomy,” Lott said. “I thought it was scar tissue because it was literally in a line along the scar. I think the physician knew it was a tumor, but because I wasn’t seeing her for that reason, she recommended I get it checked out.”

Lott promptly made a follow up appointment and found out her worst nightmare had come true. 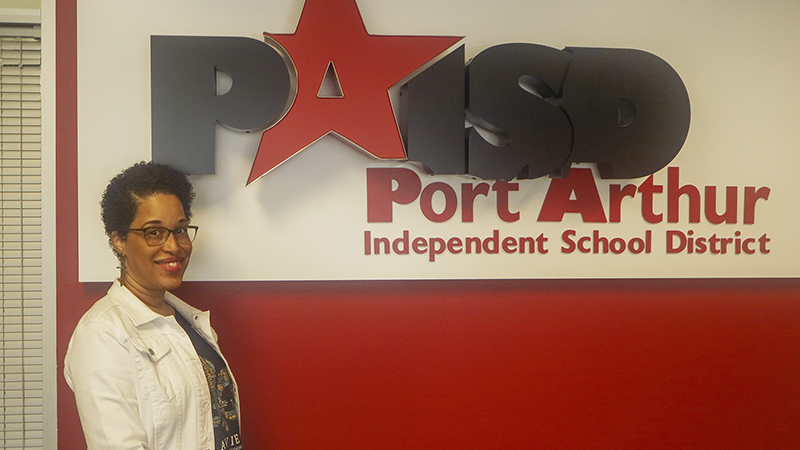 “It was a reoccurrence,” she said. “I feel like Dr. Deborah Sherman in Beaumont, who is with Southeast Texas OBGYN, saved my life. I knew it was there. I had measured it for like a year to see how much it would grow and it didn’t grow much at all so I just ignored it. If she had not said anything, I would’ve continued to ignore it and I don’t know what that outcome would’ve been.”

She received the same diagnosis, but on the opposite breast from the first time in 2007.

“They confirmed that it was nothing that was missed,” she said. “This was just the less than three percent. I had the implant and the tumor removed again. They recommended chemo and radiation and I chose chemo in the form of a pill instead of an IV.”

Lott was given the instructions to take the pill every day for five years. She is currently in year four of the treatment. She also did 35 rounds of radiation, which is five days a week for seven weeks.

Lott has to check in with her doctors twice a year, because of the side affects of the pills.

“It can affect the bone density,” she said. “I have to take vitamin D. Initially, I wasn’t walking and the vitamin D wasn’t enough, so I had to get an infusion. Now, I am walking because I don’t want to do the infusion again.”

Lott advocates for everyone to check themselves and for those who are recovering to attend their regular checkups.

“I know it is a lot to spend the day in Houston for one appointment, but it can help,” she said. “Some people feel like they don’t need to check because they don’t have a family history. You don’t need a family history. A lot of times, it is environmental. When I had the reoccurrence in 2017, they redid the genetic testing because there were a total of seven genes they look for. I still tested negative. It could be a gene they haven’t discovered or it can be environmental.”

Lott said stress, where one lives, such as near refineries, and what they eat can all be contributing factors to cancer.