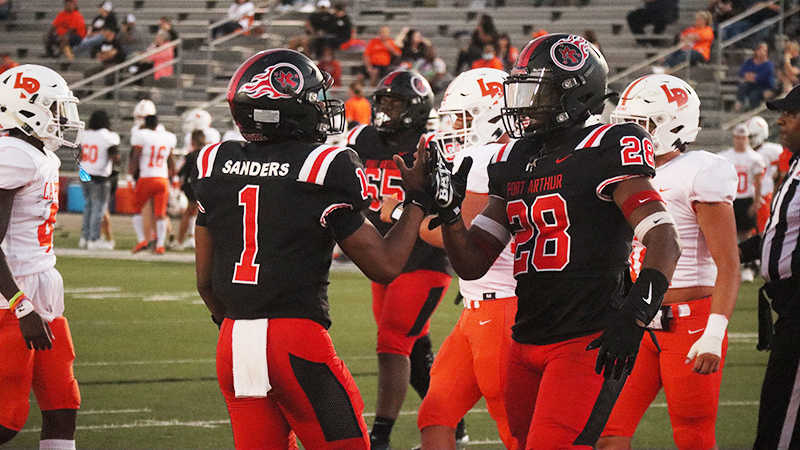 Through two district games, the Titans seem to be unstoppable with the league’s top offense and defense.

Memorial (4-1, 2-0 in District 9-5A Division I) has outscored district opponents 67-0. This week, the Titans host Galveston Ball at Memorial Stadium with kickoff scheduled for 7 p.m. Friday.

The Memorial defense has yet to allow a point in district competition, but Memorial Head Coach Brian Morgan said the team is not focused on keeping opponents scoreless as much as they just want to win games.

“We haven’t talked about it, but nobody wants to be the one to screw up and be the one person to give up a point,” he said laughing. “They are playing at a really high level and running to the ball. Even when other teams get a play here and there, somebody runs them down and makes them drive the length of the field.”

On the other side of the ball, Memorial’s offense is overwhelming the competition at 511 yards per game. No one else in the district has reached the 400 mark.

The offense starts with quarterback Jah’mar Sanders, who leads the league in passing and rushing with nearly 2,000 yards of total offense in the first five games. Sanders also accounts for 20 touchdowns.

“It is good to move the ball and score points,” Morgan said. “More than anything, we are able to run the ball. That helps the defense. We can get ahead in the second half and really shorten the game up. More importantly, we are doing things right. It is more important to not lose the game than win the game. We don’t have a lot of pre-snap penalties and personal fouls. We don’t give up a lot of big plays on special teams. If you don’t do those things, you can win a lot of games.”

“The quarterback can throw it around a little bit,” Morgan said. “The quarterback is athletic. They have some skill guys and some pieces around to do some really good things on offense. Our defense is going to have to be prepared.”

Morgan referred back to last year when Ball played Memorial tough in a 35-21 win for the Titans.

“They gave us all we could handle for about three quarters last year,” he said. “We can expect the same thing this year.”

Memorial has the district’s top-three receivers in Ilijah Williams, Adrian Hayward and Kelby Blanchette. Williams has 509 yards and five touchdowns. Willams and Blanchette lead the district in yards per reception.

Ball ranks third in total defense, allowing only 214 yards per game. Galveston Ball is coming off a 14-7 loss to Beaumont United.

This is Homecoming week for the Titans. Morgan said the team will enjoy playing in front of some fans that might not come out otherwise.

“This should be a good little crowd,” he said. “I harp on our guys to play an even keel. Let’s not get too high or too low. We want to warm up and prepare the same way.”