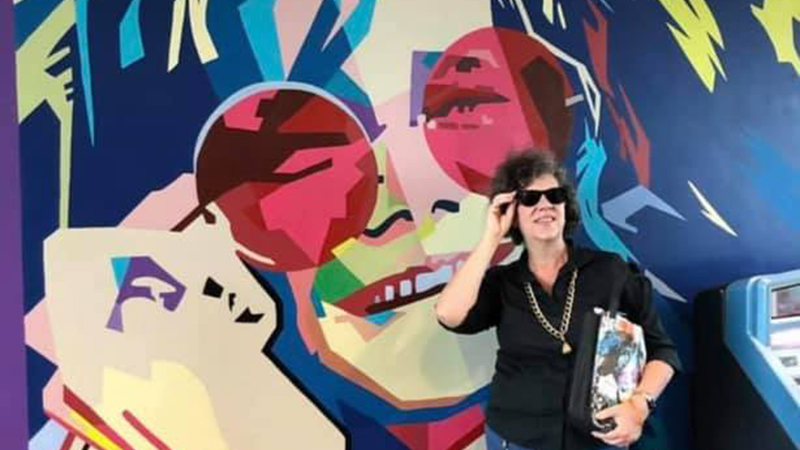 Darragh Doiron, destination management specialist with the Port Arthur Convention and Visitors Bureau, stands in front of a new mural at the Ben J. Rogers Regional Visitors Center in Beaumont.

Monday (Oct. 4) marked the 51st anniversary of the death of Janis Joplin, which almost coincided with completion of a wall mural featuring Janis at the Ben J. Rogers Regional Visitors Center in Beaumont by local artist Kimberly Brown.

Kathi Hughes, director of the center, said they greet many visitors including international ones, who want to know about Janis.

The Museum of the Gulf Coast can also make that claim as they see visitors from across the U.S. and world coming to Port Arthur, Texas, to see Janis’ mementos and buy up t-shirts, books and more.

Janis had her naysayers that she was more than aware of. The hurt and pain she felt in her life reverberated in her music, coming forth in a bluesy, three-octave range where growls, wails and screams fit in perfectly.

And despite her many adoring fans, there are still plenty of other individuals who look at her drug and alcohol abuse as signs of being a terrible person.

To me this is strange where, in today’s day and age, those battling addiction are seen in a less harsh light then before.

There’s the 2013 death of Cory Monteith of Glee, who passed at the age of 31 from a mix of alcohol and heroin.

Ironman himself Robert Downey Jr. once battled heroin along with cocaine and alcohol before hitting bottom and coming clean. Singer Demi Lovato has battled drug and alcohol addictions and mental health issues as well.

This column wasn’t meant to rehash addictions of the rich and famous, though I wanted to mention that battling addictions seem much more socially acceptable now than decades ago.

We, as a society, can look at the person dealing with an addiction and know there is a reason behind that person’s choice. This isn’t condoning the decision to drown their issues in drugs but recognizing the factors behind it. Alas, the naysayers about Janis will continue to naysay.

Now, with all of that said, let’s get back to the topic of Janis’ musical legacy. Here we have a woman who, in a time when men virtually ruled music, roared onto the stage and influenced the likes of Melissa Etheridge, Pink and Stevie Nicks.

I sit here and wonder “what if” she hadn’t died at the age of 27. Would she have found her happiness and balance in life and continued to rock on?

As a Port Arthuran myself, who graduated from the same high school, though decades apart, and am now a reporter — would I have had the chance to (gasp) meet and sit down for a one-on-one interview with her?

I can only dream on that one.

But for now I can take a stroll around the Ben J. Rogers Regional Visitors Center and the Museum of the Gulf Coast for that inspiration.