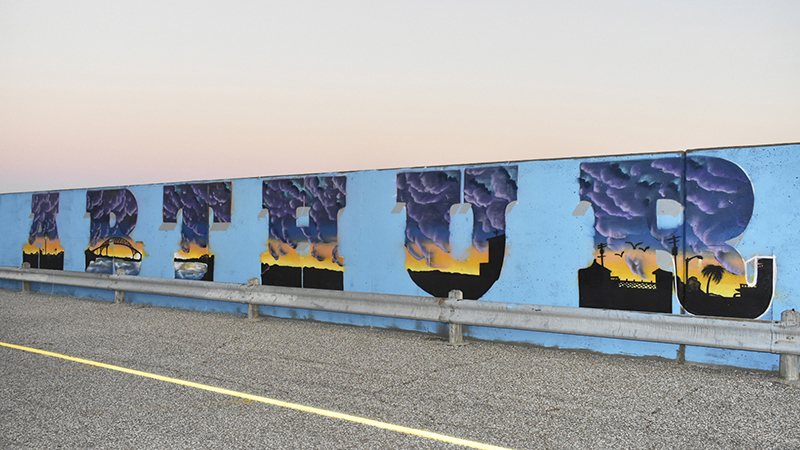 The letters ARTHUR entail an image of Port Arthur on the city’s Seawall as dusk settles in December of 2019. (I.C. Murrell/The News) 12-7-19

AUSTIN – Governor Greg Abbott announced Thursday the City of Port Arthur, having completed the multi-step training and certification process, has been designated as a Film Friendly Texas community by the Texas Film Commission.

Abbott congratulated the City on earning the designation, joining more than 160 other Texas communities.

“As we unleash the full might of the Texas economy, I look forward to continuing to work alongside all of our communities to ensure they have the knowledge and tools needed to succeed,” he said. “Through the Film Friendly Texas training and certification process, communities large and small are readied to help match local businesses with production-related needs, creating jobs for Texas-based crew members and local residents, as well as spurring on-site spending at local small businesses. As the Texas Film Commission celebrates 50 years of service, I am especially proud of all they have accomplished in helping communities like Port Arthur market their unique local appeal and achieve economic recovery through media production.”

“The community is ready to get to work and eager to support projects of all sizes,” Creighton said. “Filmmakers, producers, and vendors will soon see what we all know — Port Arthur is an excellent community to shoot a film, start a business, and raise a family.”

House Speaker Dade Phelan said Port Arthur has been known as a cultural powerhouse that has hosted a number of writers, actors, producers, singers and filmmakers.

“With the unparalleled coastal and marsh vistas, historical buildings, and Southeast Texas hospitality, Port Arthur is well placed to reemerge as a prime destination for the film industry to explore,” he said. “I am proud to represent the people of Port Arthur and look forward to the impact their certification as a Film Friendly Texas community will have on the area.”

The Museum of the Gulf Coast links the community to a history of music and movie ties, and “we’re ready to add to that legacy,” she said.

“We are honored to be a Film Friendly Texas community,” according to Castillo. “Bring on the features, shorts, music videos, documentaries, and more. After a day of filming, crew members will be able to enjoy our restaurants, hotels, and other highlights, including Sea Rim State Park. Every story starts somewhere, and we’d like it to be here.”

The City of Port Arthur joins more than 160 Film Friendly Texas communities that receive ongoing training and guidance from the Texas Film Commission on media industry standards, best practices, and how to effectively accommodate on-location filming activity in their community.

The Texas Film Commission in the Office of the Governor’s Economic Development and Tourism Division has attracted $1.66 billion in local spending and created more than 157,000 production jobs across the state from 2007 to 2020.