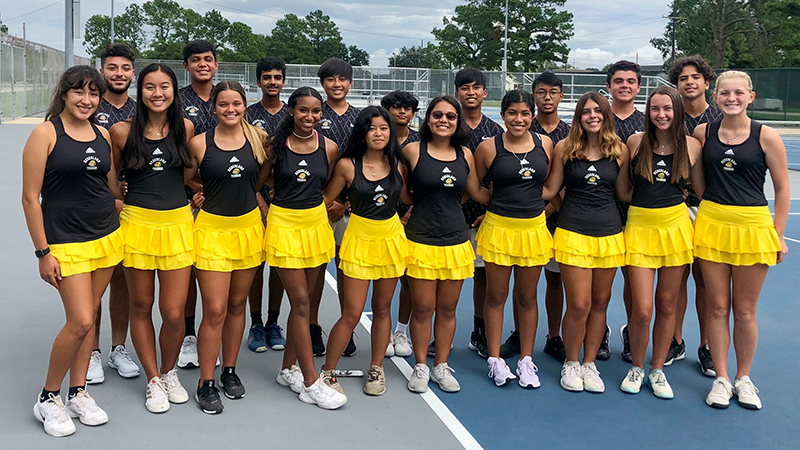 The Nederland tennis team is set for a second-place finish in district. The Bulldogs will play their final match against Galena Park Thursday to conclude the team season.

Singles and doubles play will start in the spring.

“It has been really competitive this year,” Nederland Head Coach Jorge Lopez said. “Barbers Hill, PNG and Galena Park have been really good. I feel like we did great. I was kind of disappointed that we lost to Barbers Hill. I really think we should’ve won that match and that we were a little over confident. The coach from Barbers Hill put his players in the right place to beat us.”

The Bulldogs lost two three-set matches to the Eagles. Lopez said he believes his team was good enough to win it all.

“If we would’ve won one of those matches, we would’ve beaten them,” he said. “We really only have two boys back from last year’s team. We had three that didn’t want to play this year and some graduated. I moved three freshmen to the team and one plays all of the time. He is a good player.”

Aaron Berry led the boys team for the season.

“He was the district winner in spring,” Lopez said. “He hasn’t lost in preplay and district play.”

Megan Do, who made it to the final match at state last season, returns for the Bulldogs. Do has raised her level of play, Lopez said.

“(Team play) has helped her a lot,” he said. “It has given her something to look forward to and playing college next year. We are focusing on her serve. If we can get her serve to a college level, I think she is going to be really good. Serve is such a big part of the game. We have been working on that a lot.”

Lopez said Do and Berry elevate each other.

“(Berry) is very strong and he brings a lot to the table,” Lopez said. “He is great practice for Megan. I know his (Universal Tennis Rating) has gone up a lot. He is already in the 60s. That is high. He has improved a lot because his consistency and percentage play has been better. He doesn’t lose dumb points and he attacks. He is a big hitter.”

Do and Berry are captains and are joined by Srikar Rachamalla, Sam Carrillo and Cassidy Venable as the only returning starters.

Lopez said the team’s play in the fall will propel the student-athletes in singles and doubles play in the spring.

“This time has really helped,” he said. “The top players feel like they have to win all of the time. Everyone has really improved, so I think we are going to be in really good shape in the spring.”