Kelli Sartin murder trial witness: “I regret (it) to this day”

A neighbor and two family members attempted to do a welfare check on Charles Sartin Sept. 4, five days before his body was found inside his Sabine Pass residence.

Jerry Eldridge, the first witness during the second day of testimony, said he had gotten a call asking to check on his neighbor.

Eldridge was then joined by Sartin’s niece, Charlene Deslette, and Kristi Heid, who was related to the Sartins through a previous marriage.

Deslette said she went to the local community center, where a Port Arthur Police officer was often stationed and requested help.

However, she said, the officer would not allow them to enter the house; and that the moan supposedly heard by Eldridge was not enough evidence to enter without permission.

The actions by the police department, she told jurors, prompted her to file a report against the officer with the PAPD the following day.

On the same day family members were attempting to enter the Sartin home on Tremont Street, Kelli Sartin had gone to Sabine Pass school, where both she and her father frequently got hair cuts from the cosmetology department. But on this day, said cosmetology teacher Belinda Perkins, Kelli’s mannerisms were not as they were during prior visits. 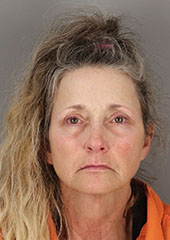 “I did not recognize her,” Perkins told jurors. “She had some very large glasses on and a hat. I’ve never seen her like that before. I knew something was not right.”

Although Perkins said the woman now accused of killing her father “was pretty calm.”

Perkins contacted Heid, superintendent of the district, and told her of Kelli Sartin’s visit.

“I immediately tried to find a way to do a wellness check on Charles,” Heid said.

When Charlene Deslette could not get into the house, they called Eldridge. And while Heid did not hear a moan, she did hear the distinct barking of a dog inside the house — a sound one witness said remained prominent from the back of the house.

During this time, Heid said, the accompanying officer was uncooperative.

“He did not want to assist me at all,” she said. “He threatened to arrest me. If we went into the house, he said he would charge me with breaking and entering.”

Assistant District Attorney Phillip Smith asked Heid if she had done everything in her power to check on Charles Sartin that day.

“Short of kicking in the door — which I regret to this day — yes, I thought I did,” she said. “I do regret not just going in.”

On Sept. 9, at 4:14 a.m., Charles Sartin’s body was found in a bedroom of his residence “wrapped in bedding and a tarp in a bedroom,” according to a probable cause affidavit.

The door to the bedroom where his body was found had been taped closed and was covered outside by a metal rack used to hang clothes.

Investigators at the time estimated that he had been dead at least four days.

He was “severely decomposed,” Detective Adam Cousins told jurors. “Through my experience I’ve seen several deceased persons and I could tell he had been deceased for some time.”

The first officer on scene, Toby Paul, told jurors on Tuesday the smell of death was obvious from outside the residence.

Cousins on Wednesday said it was the strong odor of bleach inside the house that first struck him as odd. The flooring had been removed, the temperature was set low and the residence was “very” clean.

Cousins found Charles Sartin’s body laying on his right side with bruising to his left shoulder and chest area.

When asked if he believed Charles Sartin killed himself, Cousins said “given his age, I thought that was highly unlikely that could occur.”

And same as Officer Paul said Tuesday, Cousins said he had never in his career as a peace officer known of anyone to beat themselves to death.

While Charles Sartin’s body was found wrapped in a tarp and covered with blankets, Defense Attorney Tom Burbank on Tuesday said tarps were often used to cover furniture in the house due to the victim’s incontinence.

Relatives who spoke to jurors Wednesday spoke often of being isolated from Charles Sartin. Heid and Deslette said Kelli Sartin and her adult son, both residents in the home with Charles Sartin, had not only banned them from visiting the house but from even being on the street two years prior to Charles Sartin’s death.

“Several family members attempted to see Charles and they were turned away and told to get off the property,” Heid said.

Smith said there had been at least four calls to Adult Protective Services in the time Kelli had been living there, and Heid said family members were working with attorneys at the time of Charles Sartin’s death to attempt to have him removed from the home.

Deslette said she was unable to physically check on her uncle as she could not put herself in a place with potential police conflict due to her job with the Internal Affairs Department with the Federal Bureau of Prisons, from which she is now retired.

But in May 2019, when a neighbor called and said they had seen an ambulance at the residence and Charles Sartin had been taken to the Medical Center of Southeast Texas, she went straight there to see him.

She told jurors she noticed injuries on his body and contacted a patient advocate at the hospital who reopened a case with Adult Protective Services.

That was the last time she saw him.

Following her arrest on Sept. 9, Kelli Sartin was interviewed for four hours by two employees of the Port Arthur Police Department.

Parts of the video, which was played Tuesday and Wednesday, were mostly inaudible to those watching court hearings online. However, Cousins was questioned extensively by Smith and Burbank about Kelli Sartin’s testimony.

“She was groggy,” Cousins said. “She was in a resting position against a wall. She wasn’t emotional. She wasn’t crying.”

He described her emotional state as “up and down like a roller coaster.”

For more than three hours Kelli Sartin continued to tell police that her father had beaten himself to death.

But towards the end of Cousin’s testimony, Smith recalled parts of what was said.

In the last 3-4 minutes, Kelli Sartin admitted that, at one point, she had the spatula and rolling pin in her hand.

Afterward, she “admitted she had hit her father at least three times.”

The state rested their case at the end of Wednesday’s hearing. Burbank said he anticipates doing the same on Thursday.

Click here to read testimony from Day 1 and additional background on the case.