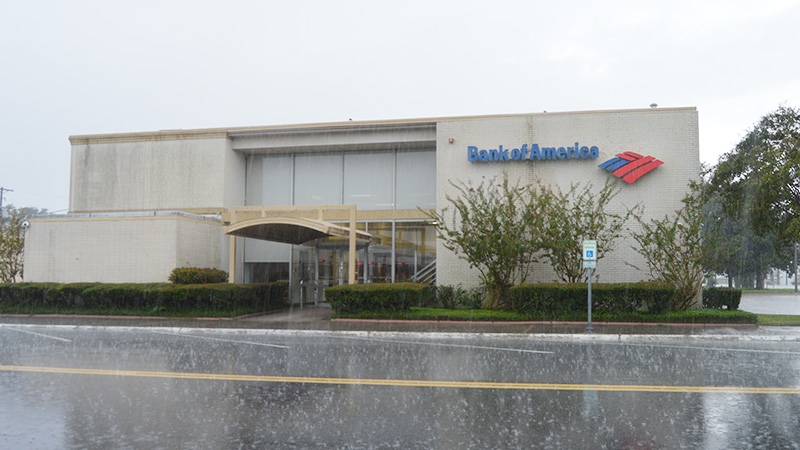 The Bank of America building is located at 1308 Boston Avenue in Nederland. (Stephen Hemelt/The News)

NEDERLAND — New development on Boston Avenue in Nederland could include an event center, business incubator or bed & breakfast.

Those are preliminary suggestions, but what is known is Nederland City Councilmembers gave initial approval to the Nederland Economic Development Corporation to purchase the Bank of America building at 1308 Boston Avenue for a price not to exceed $520,000.

The building is owned by Ploutti, LLC, and news of Bank of America’s closing in Nederland put the future of the building somewhat in doubt. There are also a couple of other smaller leasers at the location.

This potential transaction is separate from the Nederland Economic Development Corporation’s purchase of the parking lot across the street from the bank building, which was approved in May by the city council.

The Nederland Council is scheduled to vote on final approval of the bank building at an Oct. 11 meeting.

Nederland EDC Executive Director Kay DeCuir said the bank building is Americans with Disabilities Act (ADA) compliant and includes an elevator. If approved, the EDC would like to close the sale by the end of October.

“There are other offices that are being occupied under lease, and they will not expire for two years,” DeCuir told Councilmembers on Monday. “During that time we will do our due diligence to decide what we want to do with it. There are different ideas on the table, but it gives us time to study what would be best for the purpose of that building.”

DeCuir said some suggestions discussed by EDC board members included an event center, business incubator or bed & breakfast, but cautioned those are preliminary ideas and are not a complete list of what ultimately would be considered.

“We’re working with potential developers to do different things with this, coming up with plans and ideas,” DeCuir told the Council.

“Go down there and see what it is doing,” he said. “I think the EDC is trying to help it.”

Mayor Don Albanese, who is also a member of the EDC board, said the bank building purchase prevents someone else from coming in and making the location a warehouse.

“We want people in it,” Albanese stressed.

DeCuir did tell the Council she was not aware of anyone else who was interested in purchasing the building.

Following the meeting, DeCuir told Port Arthur Newsmedia there could be revenue-generating opportunities at the location during the EDC’s two-year developmental phase.

“We have people looking for office space right now who only need a single office,” she said. “I will probably approach the (EDC) board and let people rent an office space for the duration while the others are in there. Why not? It gives these people a place to develop a client base before they may need a larger location.”