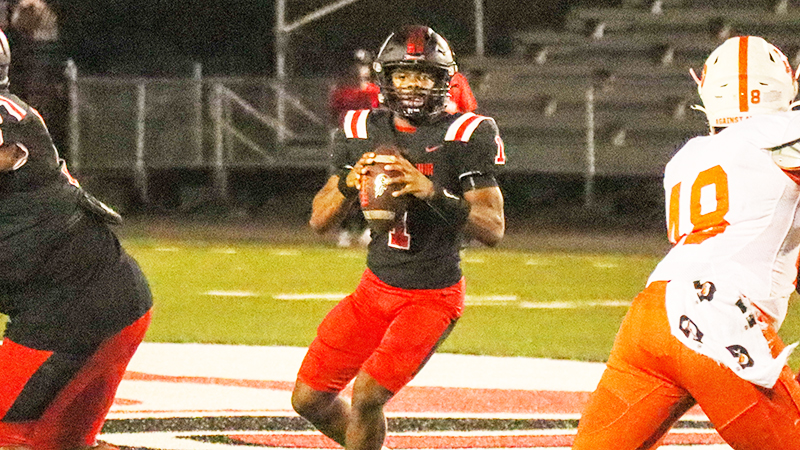 The Lamar University football program hosted several high school athletes from the area during their game against Abilene Christian over the weekend, which concluded with the school landing Memorial Titans quarterback Jah’mar Sanders.

The Titans are coming off a 34-0 win over La Porte Friday, where the senior threw for 200 yards and three touchdowns in the contest. Sanders was the MVP of District 9-5A Division I last year.

Through four games this season, Sanders leads the district with 901 passing yards and seven touchdowns to go with 410 rushing yards and six rushing scores.

“It is great on both ends,” Memorial Head Coach Brian Morgan said. “Lamar gets a local guy that is a really dynamic football player, which is something good. They have had some local guys, but they haven’t really gotten dynamic guys from this area. On that end, they benefit. He gets to stay close to home. Mom gets to watch him play.”

Morgan said he is excited to see what Sanders brings to the Cardinals.

“Seeing them play and knowing his skillset, I think he can bring a lot of things to that team at multiple positions,” Morgan said. “I know (Sanders) is not that tall, but he is talented enough to play quarterback there. It may be something else or however they want to use him. He can play there.”

Sanders said he is happy to finally make his selection.

“It is stress-relieving,” Sanders said. “I’m happy to be officially going to college and know where I am going. Naturally, I wanted to stay as close to home as possible. I wanted to stay close to my mom so she won’t have to travel too far because I need her at all of my games.”

Sanders was one of three Titans to commit to college programs over the weekend. Defensive back Jaylon Guilbeau selected Texas Christian University as his landing spot after narrowing down his choices to the Horned Frogs, Texas and Texas A&M over the summer. Defensive end Christian Thomas will take his skills to Northwestern State.

“The best thing is it is now off their minds,” Morgan said.

On Saturday, Lamar hosted several high school players from the area at Provost-Humphrey Stadium. Nederland’s Jaice Beck and Jack Beiber attended the game along with Sanders.

Shortly after Sanders announced his verbal commitment, Lamar Special Teams Coach and Assistant Recruiting Coordinator tweeted out “LU is about to lock the 409 down!!”

Lamar Head Football Coach Blane Morgan was in attendance for Mid County Madness Friday to get some eyes on some potential recruits and take in the scene.

“Mid County was an incredible atmosphere,” he said. “It was great to see two longstanding rivals go at it on the field. It was also great to just get out and watch some big time high school football. There was some incredible talent and coaching on the field.”

Because of NCAA rules, coaches or people associated with college programs are not allowed to comment on individual recruits that have not signed letters of intent. Blane Morgan said recruiting in Southeast Texas is vital to the program’s success.

“We’ve given our coaches different schools in the area to go out and visit, and we were able to get out and do some of that (Friday),” he said. “It was great to be able to get out there visit with these schools because it’s something we’ve not been able to do with this staff until recently because of COVID restrictions.”