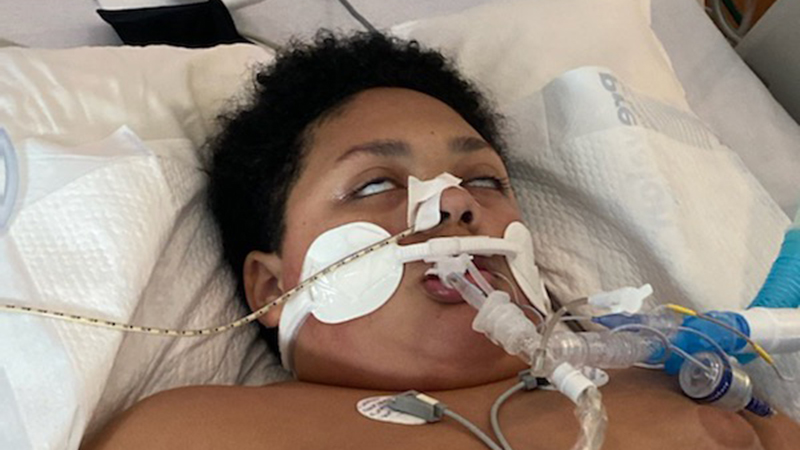 12-year-old Dre’den Lowe is seen in a medically induced coma due to complications of multisystem inflammatory syndrome (MIS-C) in context with COVID-19. (Photo courtesy of Missy Lowe)

HOUSTON — Missy Lowe’s son Dre’den woke her up at 3 a.m. Wednesday with a terrifying request.

Dre is homeschooled in Nederland, which allows his parents to keep a pretty close eye on him. Missy said he started running a little bit of fever on Sept. 19 and was immediately tested for COVID at Walgreens. It was negative.

Missy and Dre have both been vaccinated.

A call to a nurse practitioner led to concern that it might be the flu, so Dre was watched at home with rest and Ibuprofen.

Complaints of neck and back pain persisted, but daily COVID checks from Sept. 19 through Sept. 21 came up negative, setting up Wednesday’s startling scare.

Missy packed up Dre, and they immediately went to a Beaumont hospital.

Dre’s blood pressure dropped to dangerous levels, and the plan was reached that his appendix was inflamed and needed to be immediately removed.

Nothing improved, and hospital staff told Missy late Wednesday night that an ambulance was coming for Dre.

He was being transferred to Texas Children’s Hospital, Missy was told, because the Beaumont staff did not know what was wrong with Dre. 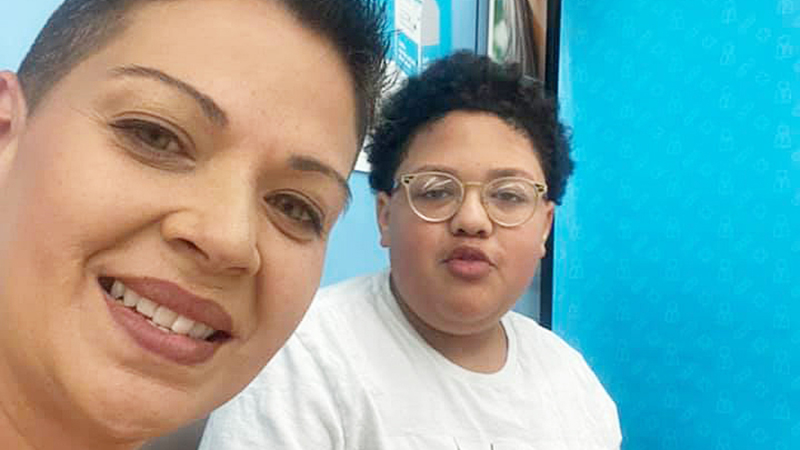 They arrived around daybreak Thursday, and Dre was quickly “poked and pryed,” Missy said, as the medical professionals worked to establish a diagnosis.

Body scans revealed each of Dre’s organs were inflamed.

Doctors needed to know more because they had no idea what was the cause, Missy said.

One doctor asked Missy to breakdown the last two months for her family, going over the history, activity and health of all those who they came in contact with.

According to the Centers for Disease Control and Prevention, MIS-C “is a rare but serious condition associated with COVID-19 in which different body parts become inflamed, including the heart, lungs, kidneys, brain, skin, eyes or gastrointestinal organs.”

Dre was put into an induced coma on Saturday. Missy told Port Arthur Newsmedia her son was still in the coma Monday morning but had shown small signs of improvement, including slight movements of his feet, fever reduction and increased lung capacity.

“We’re trying to let him slowly heal,” she said. “When we got here, we didn’t have a diagnosis and now we have one. For the past three days they have been changing everything and just pump, pump his system. He is still tubed up and still on life support. We’re still in a coma, and it’s crazy, to be honest.

“Texas Children’s has taken the biggest steps ever because we didn’t know what was going on in Beaumont.”

According to the Mayo Clinic, MIS-C is considered a syndrome — a group of signs and symptoms, not a disease, “because much is unknown about it, including its cause and risk factors.”

Information at mayoclinic.org says “identifying and studying more children who have MIS-C may help to eventually find a cause. The U.S. Centers for Disease Control and Prevention (CDC) and the National Institutes of Health are working with doctors and researchers across the country to learn more about risk factors for MIS-C, share data, and improve diagnosis and treatment of MIS-C.”

Texas Children’s Hospital did not immediately respond to a Port Arthur Newsmedia request for comment about local trends with MIS-C or what parents should look out for.

“I have a child, you have a child and there are grandbabies out there,” Missy said. “If we are going to be stuck with COVID, then we have to know what the long-term effects are.”

She said a whole of bunch of parents have reached out to her through social media sharing stories from around the globe.

The worst include tragedies of children collapsing and dying on sports fields because their hearts are giving out.

“Us, as parents, need to know because we need to look for stuff like this before we go yanking appendixes out,” Missy said. “We have to look for the signs.

“Here I am with a 12-year-old who has been vaccinated lying here in a coma with all his organs inflamed. I’m not the only one, because these kids are popping up all over the world and parents are sharing stories.”

A gofundme account has been set up under “Help Dre Lowe and his family” to aid the family with medical bills.