PORT NECHES – The Reservation was filled to capacity and things were looking good for the home team mid-way through the third quarter when the Indians increased their lead to 28-14.

However, Nederland scored 24 unanswered points for a come-from-behind 38-28 victory over Port Neches-Groves Friday night in the District 12-5A Division II opener for both schools.

The Bulldogs snapped a three-game losing streak in the series to capture the Bum Phillips Trophy, which was their first win over the Indians since 2017. 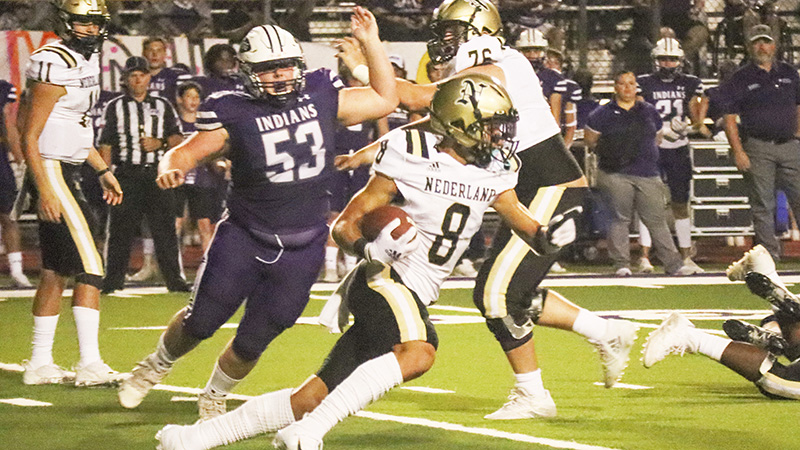 “We had guys make plays on both sides of the ball. Number 8 (Kyndon Fuselier) does what Number 8 does. He’s done it for us now for three years. Super proud for our seniors.”

Barrow’s reference to Kyndon Fuselier doing a little bit of everything for the Bulldogs included returning a fumble 70 yards for a touchdown, catching the go-ahead 34-yard touchdown pass and rushing the ball four times for 41 yards.

Nederland received the second half kickoff and advanced the ball all the way to the PNG 33. A 31-yard completion from Luke Broussard to Fuselier was the big play. However, the drive stalled, and the Bulldogs turned the ball over on downs.

PNG marched the ball down the field for a score on its opening drive of the second half. Cole Crippen hit Chase Prosperie for 30 yards. Koby Trahan followed with a 13-yard run and Trahan capped the drive with an 8-yard touchdown reception as the Indians extended their lead to 28-14 with 5:57 left in the third quarter.

The Bulldogs answered with a score on their next drive. Broussard hit Reeve Barrow for 29 yards to get the drive started. Broussard scrambled his way for a 24-yard touchdown run to make the score 28-21.

Nederland’s Slade Stoker intercepted Crippen on fourth-and-five to give the Bulldogs the ball. Consecutive completions from Broussard to Noah Kendrick for 15 and 17 yards put the ball at the PNG 19. The Bulldogs had to settle for a 38-yard Carter Pilitere field goal to cut the lead to 28-24 on the final play of the third quarter.

PNG was forced to punt the ball away on its next possession. The Bulldogs responded with an 8-play drive to take their first lead of the game. Kendrick caught a 9-yard pass and Fuselier followed with a 16-yard run. Broussard hit Barrow for 10 yards on third-and-nine to keep the drive alive. Broussard hit Fuselier for a 34-yard scoring strike to put the Bulldogs up 31-28 with 5:36 left in the fourth quarter.

On the Indians’ ensuing possession, Jacob Kotz intercepted Crippen’s screen pass and returned it 20 yards for a touchdown to extend Nederland’s lead to 38-28 with 5:20 remaining in the game.

“We made some adjustments at halftime and both the defensive and offensive fronts played much better,” said Barrow of the halftime adjustments. “Luke had a great game throwing the football and getting out of the pocket. He also had more time to sit in the pocket and make some plays.”

After both teams were forced to punt on their first possessions, PNG broke through first with the game’s first score. Crippen and Prosperie connected three times on the drive for completions of 8, 11 and 12 yards. The last of which gave the Indians first-and-goal at the 2. Trahan scored on a 1-yard plunge two plays later to cap the 9-play drive and give PNG a 7-0 lead with 4:44 left in the first quarter.

Nederland answered right back with its first scoring drive of the game. Broussard started the drive with runs of 11 and 9 yards. He called his own number for a 12-yard touchdown run to tie the score at 7-7 with 1:50 left in the opening quarter.

The Indians offense picked right back up. Crippen hit Prosperie for a 15-yard completion and again for 9 yards. Daylon Bergeron had a 12-yard catch and run. Crippen hit Landon Guarnere on a 14-yard scoring strike to reclaim the lead for PNG, 14-7, with 11:34 left in the second quarter.

Nederland turned the ball over on downs on the ensuing possession. The Indians were mounting another drive when Crippen was tackled after a 9-yard gain, but he was ruled to have fumbled on the play. The Bulldogs Kyndon Fuselier scooped up the fumble and raced 70 yards for a touchdown to tie the game at 14-14 with 5:33 remaining in the second quarter.

PNG’s big play offense struck again as Crippen hit Guarnere down the left sideline for 46 yards to the Nederland 36. Two plays later, Crippen hit Prosperie on a slant pass over the middle for an 18-yard touchdown to give the Indians the lead once again, 21-14, with 4:32 left in the first half.

Nederland was unable to answer on its next possession. The two teams headed to the locker room at halftime with PNG leading 21-14.

THE PLAY OF THE GAME WAS: Luke Broussard hit Kyndon Fuselier on a 34-yard scoring strike to give Nederland its first lead of the game at 31-28 with 5:36 left in the fourth quarter.

KEY STATS: PNG’s Cole Crippen completed 17 of 26 passes for 244 yards and 3 TDs. Koby Trahan led all rushers with 134 yards on 25 carries and 1 TD. He also had one reception for eight yards that went for a TD. Chase Prosperie had 130 yards on 10 receptions and a TD. Landon Guarnere had 94 yards on five catches.

Nederland’s Kyndon Fuselier had four catches for 70 yards and a TD. Noah Kendrick hauled in five passes for 57 yards.

PNG had 244 yards passes and 141 yards rushing but was plagued by four turnovers.

Nederland had a balanced offensive attack, passing for 182 and rushing for 178.

UP NEXT: Nederland returns home to host Santa Fe next Friday at 7:30 p.m. for Homecoming. PNG hits the road next Friday for a 7:30 p.m. game at Dayton.

Nederland man reportedly threatens to kill himself, every officer