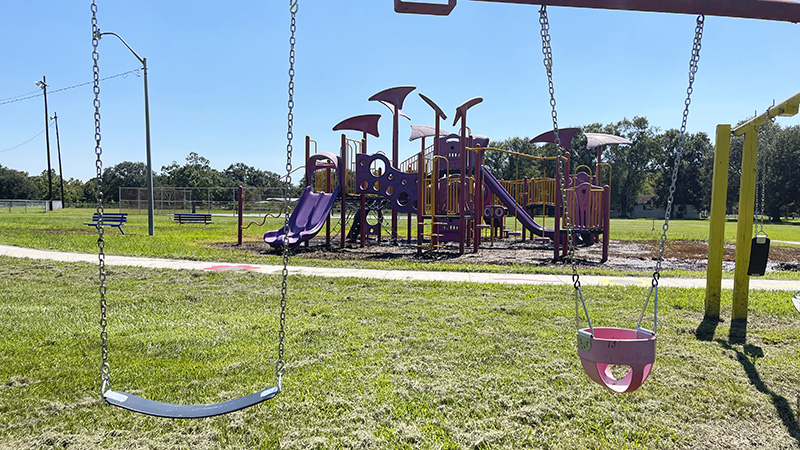 Eagles Park in Port Acres will be the scene of a community picnic next month. (Monique Batson/The News)

A group of Port Acres residents are ready to bring families from all of Mid and South County together to spend some family time outside of the house.

A community picnic has been scheduled for Oct. 9 at Eagles Park, which sits at the corner of 59th Street and Hazel Street.

“We like to get involved in the community,” said Glenda Pattison, one of the event organizers. “Several neighbors and friends decided it would be nice to put on a community picnic for the children.”

After almost two years filled with long bouts of quarantine, co-organizer Gloria Sanchez said this is also a way to get children out of the house.

“A lot of kids are on the phones, computers, and this way they can get outside and play,” she said. “We just want to get to know everyone.”

And that, the two women said, is one reason why the event is open to anyone in the area, not just the residents of Port Acres.

“This extends outside of Port Arthur,” Pattison said. “It starts at 3 p.m., so it’s a fun time for parents to bring their kids and let them run around the park, eat hot dogs and get together.”

The hot dogs will be provided by Sonic. An area church is providing three bounce houses. And the Port Arthur Police Department and Fire Department will be out with their with vehicles to let children explore and learn.

There will also be popcorn, candy and a variety of games. LifeShare Blood Center will be there to host a blood drive, as well.

Attendees are asked to bring lawn chairs and, if they want shade, expandable canopies.

Organizers said they hope to make this an annual event, and picked October because it’s generally a month with nice and cooler weather.

“The most important thing is to invite everyone,” Sanchez said.